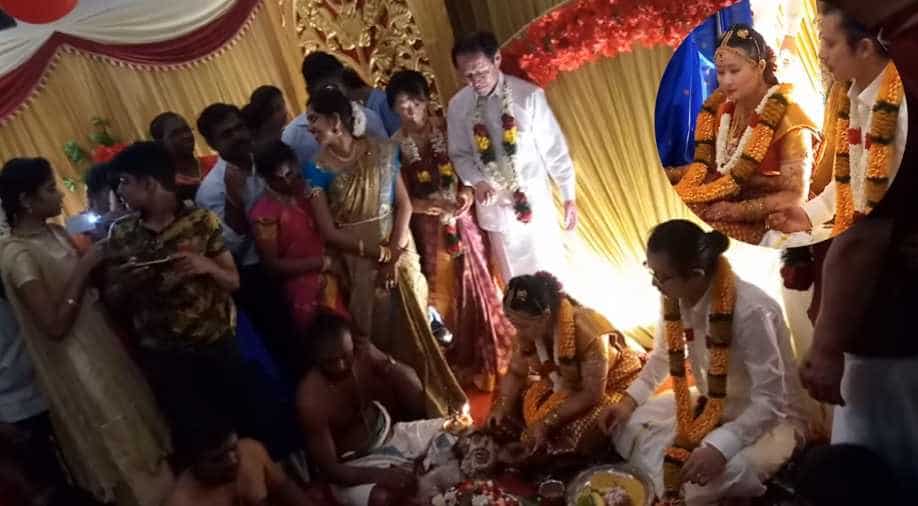 From their wedding cards to attire, the Tokyo-based couple followed the traditional Tamil way to get married. (Source: YouTube) Photograph:( Others )

Nothing matches an Indian wedding -- everything from the functions to the clothes have a grand feel to it. Perhaps this is what charmed this Japanese couple.

A Japanese couple, Chiharu Obata and Yuto Ninaga got married in a south Indian city Madurai on Sunday for their love for Tamil Nadu and its culture.

The wedding was carried out in a traditional manner -- complete with south Indian wedding attire for both the bride and groom, cards printed in Tamil, food served on leaves, and everything you can think of in a Tamilian wedding.

The couple took wedding vows in Tamil, took 'sathapathi' or seven rounds around the wedding fire.

The couple, according to an Indian news channel had gotten married in April last year in a small ceremony in Japan. They, however, got interested in renewing their vows in traditional Tamil style after Obata, who is doing linguistic research in Tamil Nadu since 2014, developed a special love for the state and its culture.

Obata came in touch with V Vinodhini and her husband Venkatesh - a couple from Madurai now settled in Japan. The Indian couple helped Obata and Ninaga to arrange a Hindu ceremony in the temple city.

Speaking to a leading newspaper, Obata said, “Many people in Japan desist from marrying the traditional way. Some get married in a church but we decided to do it here. Both sides of the family barely needed any convincing. I’m really happy today."

Obata, who now speaks smooth Tamil, credits the fluency to her research on similarities between the south Indian and Japanese culture.

Her now-husband Ninaga is getting used to the Tamil culture, even as the rituals were foreign to him.

The wedding was attended by their respective families, all dressed in traditional dresses.