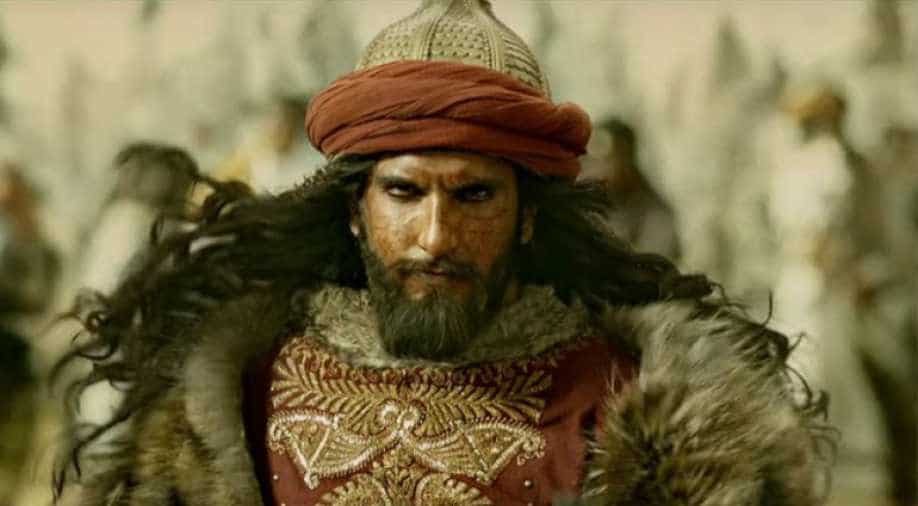 Ranveer Singh in a still from Padmaavat. Photograph:( WION )

It is almost 11pm at night but Ranveer Singh has the broadest of smiles and warmest of hugs for all the journalists who have come to interview and chat with him .  His infectious energy as usual is contagious and wards off the weariness caused due to the long wait. The actor confesses that he is on ‘cloud nine’. His gamble of playing Khilji in Sanjay Leela Bhansali’s Padmaavat has paid off and how! He recently completed eight years in the industry and this film is the perfect icing on the cake given the superlative reviews he is getting for his monstrous and astounding act. Excerpts from the interview….

Which role was tougher, Bajirao or Alauddin Khilji?
This is the first time someone is asking me about this. I have not spoken about Padmaavat since I began work on it.  I think Bajirao was more difficult mentally and physically while Khilji was tough physically. It was difficult only because of the shooting process. Due to the incidents and delays, all my work happened back to back. I was screaming my lungs out one day and doing action on the next day. During the Khalbali dance sequence, my knees had become like jelly. I could not feel my legs. While doing the action scenes, I would faint, recuperate, go aside vomit and come back to shoot. In costume dramas, normally everyone gets a break of six to eight days between sequences, which I did not get. The shooting process was extremely difficult but I knew I had to deliver. So, in terms of psyche and emotional turmoil, the role of Bajirao was very taxing but Khilji was an equally difficult part to play.

There was buzz that you were to see a shrink to undo Khilji from your system. Is that true?
No, I did not see a shrink. I may have needed one if my so-called first aid did not work. I spent quality time with my family and best friends. I spoke my heart out on how I was feeling. I heard them out. They were my doctors. Slowly, I came back to where I was…yes, there was a point when I felt I was losing myself to this role to such an extent that I might have to visit a doctor. But my first aid worked…

Is there anything in common in between Ranveer and Khilji?
There is nothing in common. I could not relate to this person who was so manipulative, greedy and ambitious. A person who would not bat an eyelid before harming others…it is not me at all. As part of my preparation and homework, I would study such people in history to relate to the worldview of Khilji. I had to understand and convince myself that there were people like them, and draw from it to infuse life into the character. I buried into the deep, dark recesses of my life and memories, which I had brushed under the carpet and were buried in my conscience. I have confronted those demons and used them in my performance. It has been a catharsis; I am feeling a lot more lighter, happier and nicer. I only have good feelings towards people, only gratitude. I have more love, affection and kindness to give now.

Which scene was the toughest to perform ?
It was a physical concern, the way the shoot went. I shot for this elaborate dance piece after shooting back to back action scenes. After every day of shooting, I would jump into a bucket of ice from my toes to head to help recover my body. I would stay in it for three to six minutes, I slowly built it up. It is very tough to jump into a pool of ice. My body was breaking, my voice had gone with the screaming and I was doing brutal action scenes. I had so many niggles. After recovering in the ice bath, I would come back and perform. I shot back to back for action/dance sequences. On day 37, I was really broken.

People have loved Jim Sarbh’s performance as Malik Kafur and your chemistry with him.
People are talking so much about mine and Jim’s parts (laughs). It is so heartening to see that. Jim was one of the most enriching co-actor experiences I ever had. You must know this, casting Jim was my idea. I had seen Neerja and was blown away by his performance. I told Sanjay Sir to please try him out for the role of Kafur. Just after his first audition he got cast. I am too thrilled about the appreciation he is getting. We know well how much he has contributed towards the film.

Not many mainstream actors would dare to play a bisexual villain. Did you have any apprehensions knowing it could backfire?
Khilji was a bad person of so many negative shades. In personal life, I am straight. As far as playing a bisexual villain goes, not many mainstream actors would do that. Films are about imagery. Someone once told me that you are perceived as the characters you play. But then, it always excites me to push the envelope and challenge myself to do something that is a first. The bisexuality angle added to the menace, it was a complete skewing of a conservative or traditional moral compass like how scary would a person of that type be for someone with these values.
I was scared to bits for taking on the part. I was apprehensive by Sanjay Sir persisted and persuaded me. He was convinced that I could do it and backed me fully. As apprehensive as I was, I know how much he has contributed towards my growth as an actor and artiste. I took a leap of faith for him. He almost insisted that I do that. I am thrilled that what we have created together is a memorable character that left an impact on pop culture and folklore.