Why is Congress lending its voice to those who want 'azadi' in Kashmir? PM Modi in Karnataka 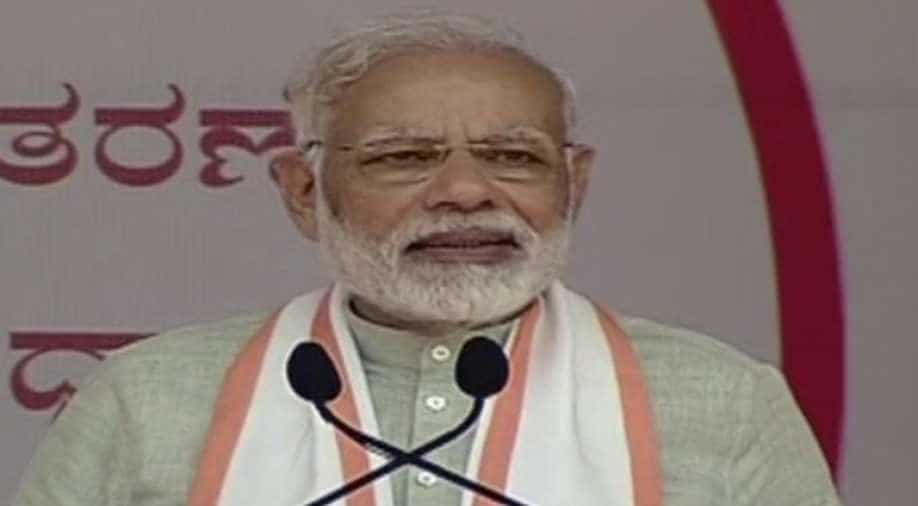 Prime Minister Narendra Modi, who arrived in Karnataka today, criticised Congress leader P Chidambaram for his remarks yesterday that when people of Jammu and Kashmir ask for 'azadi', most of them meant they want greater autonomy

Prime Minister Narendra Modi, who arrived in Karnataka today, criticised Congress leader P Chidambaram for his remarks yesterday that when people of Jammu and Kashmir ask for "azadi", most of them meant they want greater autonomy.

"Why are Congress leaders lending their voice to those who want 'azadi' in Kashmir? This is an insult to our brave soldiers," PM Modi said at a public meeting in Bengaluru.

"Yesterday's statement of a Congress leader on Kashmir clearly shows how the party feels on surgical strikes and the bravery of our Army," he added.

"Those who were in power till yesterday, how come they have suddenly taken a U-turn and a shamelessly giving such statements," PM Modi said.

"They are mixing their voices with those who want freedom for Kashmir," he added.

"Do such people, who base their politics upon the sacrifices of the brave do good for the country?"

#WATCH:PM Modi says "Congress leaders lending their voice to those who want Azadi in Kashmir, is an insult to our brave soldiers" #Bengaluru pic.twitter.com/Q1xX7XcOb0

Chidambaram said in a statement that PM Modi was "imagining a ghost and attacking it."

In his speech, PM Modi also said that Bengaluru was a "land of startups", the innovativeness of the youth must be used to bring clean cooking to the doors of the poor.

"Bengaluru is the land of startups. Youth here are innovative. Let's begin a startup to bring clean cooking to the doors of poor," PM Modi said.

The prime minister earlier addressed a public meeting in the town of Ujire.

In his speech, the prime minister spoke about the importance of skill development in the 21st century and said a "youthful India must harness its demographic dividend".

The prime minister said he was ensuring that the fruits of development reach intended beneficiaries without scope for corruption.

He also emphasised that India should not lag behind in the digital currency era and said that his government had linked RuPay card, mobiles, and bank services with Aadhaar.

The #RuPay cards will enable the self-help groups to begin cashless digital transactions. Another step towards #DigitalIndia. #ModiInKarnataka https://t.co/ZNtMYmMR50

The prime minister also raised the topic of micro-irrigation and said that if India adopted the principle of "per drop, more crop", then a lot of change could be brought about.

He also spoke about the need for reducing the usage of urea.

"We need to give importance towards living in harmony with nature and not think about short-term gains. We need to reduce the usage of Urea," PM Modi said.

"Happy that I got the opportunity to offer prayers to Lord Manjunatha," the prime minister said.

PM Modi also inaugurated a railway line connecting Bidar to Kalaburagi which is expected to reduce the travel time between Bengaluru and New Delhi by over six to eight hours and the distance by over 350 km.