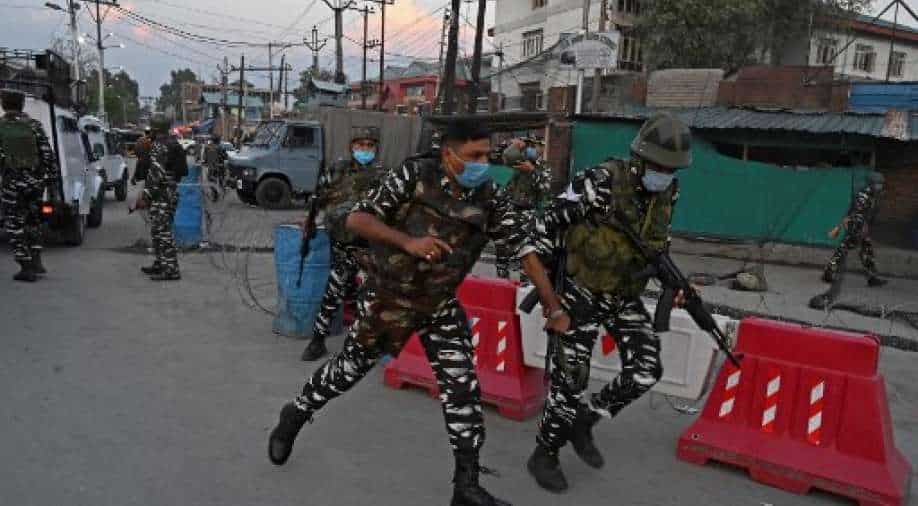 Security personnel arrive near the site where a man was shot dead in Srinagar Photograph:( AFP )

An encounter broke out between terrorists and security forces in the Chanapora area in Srinagar.

An encounter broke out between terrorists and security forces in the Chanapora area in Srinagar on Thursday, police said.

"Encounter has started at Chanapora area of Srinagar. Police and security forces are on the job. Further details shall follow," the Kashmir Zone police said.

There are no reports of any casualties so far but the exchange of fire took place for several minutes, officials said.

They said a search operation is going on to track down the terrorists.

Meanwhile, the mortal remains of Karnveer Singh, a soldier with the Indian Army who lost his life during an encounter with terrorists at Dragad in Jammu and Kashmir's Shopian, would be brought to his native Deomau Daldal village in Madhya Pradesh's Satna district by Thursday evening, an official said.

Singh, 25, lost his life and two other soldiers suffered injuries in the gunbattle at Shopian on Wednesday in which two terrorists were killed.

"The body of Karnveer Singh would be brought by around 6 pm today," Satna Additional District Magistrate (ADM) Rajesh Shahi said.

Singh's acquaintances said that when his family was about to start celebrating his birthday as per the Hindu calendar at his village, they came to know about his death.

Singh's father had last spoken to his son on Tuesday night, just hours before he went on his final duty, they said.

According to the ADM, Singh, who was with 21 Rajput Battalion, hailed from a family of soldiers. He had joined the Army in 2017 when his father Ravi Kumar Singh retired as subedar major from the military.