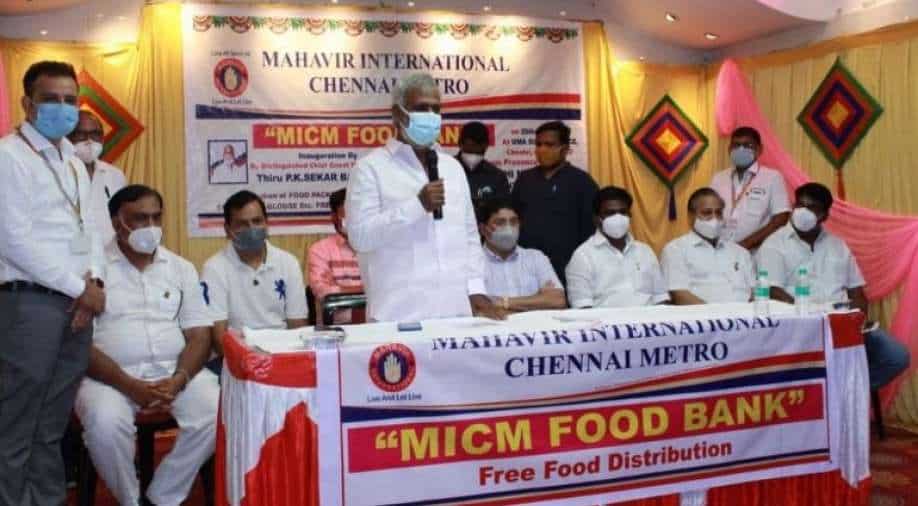 The minister assured that DMK would take part in the charitable events of the community and support them, despite them not having voted for the 'Dravidian party'

The comments made by Tamil Nadu’s Hindu Religious and Charitable Endowments Board Minister, PK Sekar Babu have sparked controversy.

At the inauguration event of the Mahavir International Chennai Metro Foodbank, the minister made a political speech that the DMK would work for the Hindi-speakers (North Indians), despite them having voted for the BJP in large numbers.

The remark comes after Sekar Babu had won against BJP Youth Wing State president Vinoj P Selvam in North Chennai’s Harbour Constituency, which has a large share of communities from Gujarat, Rajasthan, who have resided in the area for many generations.

Starting off his speech by lauding the food donation as the highest form of charity, the minister assured that DMK would take part in the charitable events of the community and support them, despite them not having voted for the 'Dravidian party'.

"I have been living in this region for almost 40 years. Today, the situation has changed a lot and many North Indian friends have seen economic progress, and this is because of Dravidian parties in Tamil Nadu. The BJP is not the cause for your well-being, increased standard of living or economic development, it is the Dravidian parties," Babu said, adding that, despite all this, the North Indian Community has always been voting for the BJP out of some fascination.

Interestingly, DMK and AIADMK have been in power in Tamil Nadu since 1967, following the defeat of the then Congress government.

"Our DMK Member of Parliament Dayanidhi Maran asks why do we have to work for them (North Indians) when they don’t vote for us, to which I say, even they belong to this land. The MLAs and Chief Minister are common representatives, irrespective of whether some people voted for them or not. It is in that spirit that we are working for you," he added.

He further goes on to say that the North Indian Community vote bank did not cast their votes for DMK in Assembly and Parliamentary polls that took place in years 2014, 2016, 2019 and 2021. He claims that the DMK hardly got any votes in the region where North Indians lived in large numbers, despite the party having worked for the community.

In the 2021 Assembly polls, he said that in the areas where North Indians lived, DMK secured only 50 votes, whereas the BJP secured 300-350 votes. "Whenever we meet you, you say that you voted for us. But these are not ballot paper times, EVM data clearly points out which area voted for whom. You did not vote for the MLA and MP who worked for you, but how much ever you reject us, we won’t reject you. DMK is there to work for you," Babu boasted.

Reacting to the DMK Minister’s comments, the BJP has said that such comments are blatant threats against BJP voters. The statement also condemned the manner in which DMK MP Dayanidhi Maran raised questions (as quoted by Sekar Babu) about serving people who didn’t vote for the DMK.

"Dayanidhi Maran must clarify whether he had spoken that way, it is the height of atrocity that a Member of Parliament has said something so narrow-minded and divisive," read the statement from BJP Spokesperson Narayanan Thirupathy. "It is highly condemnable that Ministers who take an oath by the Constitution and represent all the people chose to refer to a section of their constituency as North Indians. By pointing out the voters choice of preferring the BJP, is like questioning the voters’ democratic right and a blatant threat from those in power."