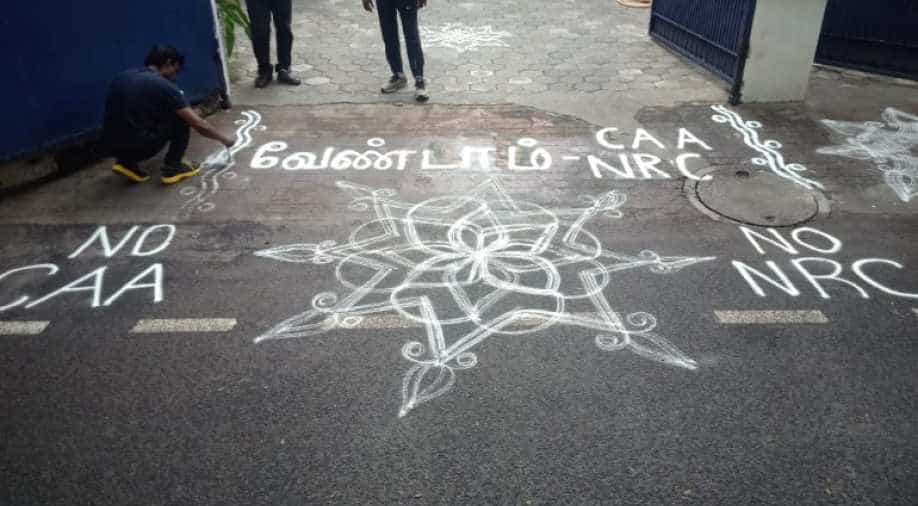 Rangoli made in protest of CAA Photograph:( WION )

The homes of late DMK patriarch Karunanidhi, his son MK Stalin (DMK Chief) and his daughter Kanimozhi(Lok Sabha MP) have had Kolams (rangolis) adorning the areas outside their gates.

The roads in front of DMK leaders homes are now sporting a new look, it has got nothing to do with the year-end, but it is in protest against the contentious CAA (Citizenship Amendment Act).

The homes of late DMK patriarch Karunanidhi, his son MK Stalin (DMK Chief) and his daughter Kanimozhi(Lok Sabha MP) have had Kolams (rangolis) adorning the areas outside their gates. However, the traditional Kolam also had messages of protest against the CAA and NRC- they read “NO CAA - NO NRC.” 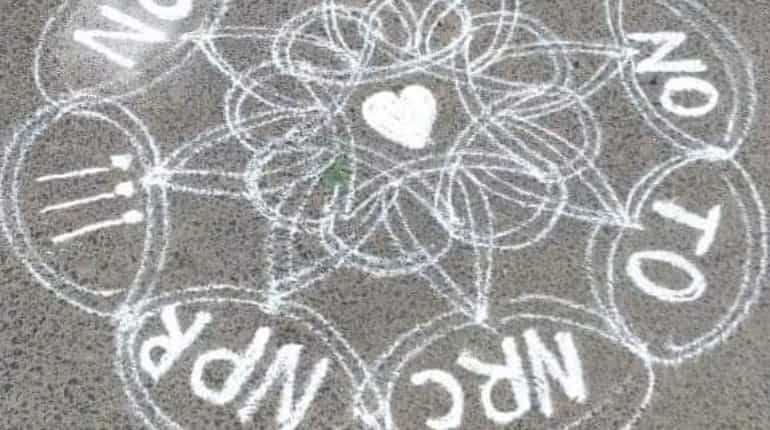 While kolam is a traditional form of drawing done on the front porch of one's home, every morning using rice flour or chalk powder, it had taken on a different dimension, as a symbol of protest on Sunday.

According to activists, 6 women were detained in a community hall on Sunday morning by J5 Shastri Nagar Police for drawing anti-CAA kola’s in the upscale Besant nagar locality. Three advocates who had gone to get the women released were also said to be detained by the police. They were released later in the day.

Police have maintained that the protesters had informed them that they wanted to draw kolams with anti-CAA/NRC messages near the Besant Nagar bus terminus between 7 am and 10 am. But the permission for the same was not granted.

Cases were registered under Sections 143 (punishment for unlawful assembly) and 188 (Disobedience to order duly promulgated by public servant) against the group.

Reacting to Sunday’s incident, MK Stalin tweeted, “This is a clear example that the authoritarianism of the AIADMK is increasing day by day.” He added that the detention of the women was in violation of their right to freedom of speech and expression guaranteed under the fundamental rights of the Constitution. He demanded that the case against them be withdrawn.

The DMK has rallied together with the Left outfits and other small parties here in their fight against the CAA and in expressing solidarity with those that have been raising their voices against the contentious bill.

The DMK and the Congress in Tamil Nadu have raised questions over why the CAA ignores the plight of Tamils who are a persecuted minority in Sri Lanka, while it considers minorities from Pakistan, Bangladesh and Afghanistan.

The DMK had staged a protest in Chennai and nearby districts over two weeks ago and later conducted an anti-CAA rally in Chennai along with their allies and like-minded parties. DMK President Stalin had asserted that their protests would continue until the Central government revoked the CAA.

However, the Central government and Tamil Nadu’s AIADMK government have repeatedly insisted that the CAA does not affect Indian citizens, adding that people must not pay attention to the rumours being spread to foment trouble.