Did Pakistan use F-16s on February 27? It says that's 'immaterial' 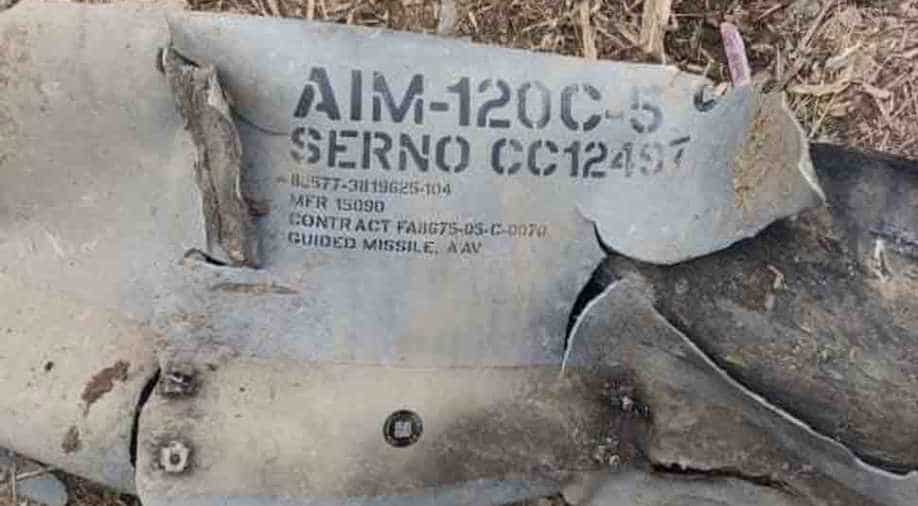 Remains of the AMRAAM missile found near the LoC. India says it was fired from a Pakistani F-16. Photograph:( ANI )

'Whether it was F16 or JF17 which shot down 2 Indian aircrafts is immaterial,' a statement from Inter-Services Public Relations, the media wing of the Pakistani armed forces, said.

Pakistan has put out an interestingly-worded statement about whether or not it used F-16s in its air battle with Indian fighter jets on February 27.

The statement — Reference repeated Indian claims about shooting down of Pakistani F-16 by India and use of F16 in air battle on 27 February — was put out by the Inter-Services Public Relations (ISPR), the media wing of the Pakistani armed forces.

"The event of 27 Feb is part of history now," the statement says.

The Indian Air Force had on February 26 conducted an air strike on a Jaish-e-Mohammed (JeM) training camp in Balakote in Pakistan's Khyber Pakhtunwa province. The terror group JeM has claimed responsibility for the February 14 suicide attack on a security convoy in Pulwama that left over 40 CRPF personnel dead.

On February 27, Indian and Pakistani jets engaged in a dogfight after Pakistan dropped bombs on Indian territory in Jammu and Kashmir from its side of the Line of Control. India says the bombs were aimed at Indian military installations but that they missed their targets.

It was the first time in over 40 years that the air forces of the two countries had engaged in combat. Both sides lost a plane each — India a MiG-21 and the Pakistanis an F-16.

The ISPR statement however says "no Pakistani F-16s was hit by Indian airforce" and that two Indian jets "were shot down by PAF".

"As regard PAF action for strikes across LOC it was done by JF17 from within Pakistan airspace. Later when 2 Indian jets crossed LOC they were shot down by PAF," the statement said.

And that is also when it began to get interesting.

"Whether it was F16 or JF17 which shot down 2 Indian aircrafts is immaterial. Even if F-16 have been used as at that point in time complete PAF was airborne including F16s, the fact remains that Pakistan Airforce shot down two Indian jets in self defence," the statement said.

"India can assume any type of their choice even F-16. Pakistan retains the right to use anything and everything in its legitimate self defence," the statement added.

Apart from the ambiguously-worded statement — "Whether it was F16 or JF17 which shot down 2 Indian aircrafts is immaterial" — it is thought that Pakistan's possible use of F-16s may violate the country's end-user agreement on the planes with the US.

India has taken up Pakistan's possible use of the F-16s with the US, supplying it with fragments of an AMRAAM missile it says was fired by the F-16s. lndia says Pakistan does not have any other fighter plane that can be fitted with an AMRAAM missile.