Death toll rises to 44 in bus accident in Himachal Pradesh, over 30 injured 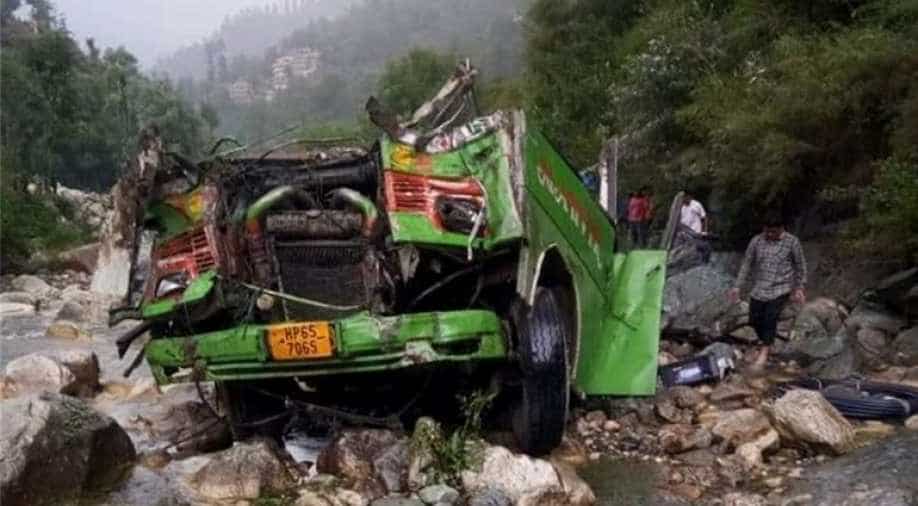 A bus skidded off the road and fell into a 300-m-deep gorge near Banjar, some 50 km from Kullu town. Photograph:( IANS )

The chief minister has ordered a magisterial inquiry into the incident, the official said, adding that transport minister also asked the administration to provide best possible medicare to the injured passengers.

The death toll in the bus accident in Kullu district of Himachal Pradesh has risen to 44 while over 30 have suffered injuries in the incident.

"It seems that the bus was overloaded. Rescue operations will continue tomorrow as well. Chief Minister will be visiting tomorrow. A magisterial investigation into the incident has been ordered," Himachal Pradesh Transport Minister, Govind Singh Thakur, said on Thursday while speaking to media persons here.

The chief minister has ordered a magisterial inquiry into the incident, the official said, adding that Thakur also asked the administration to provide best possible medicare to the injured passengers.

The bus carrying around 50 passengers fell into the over 300-metre-deep nullah near the Dhoth Morh in Banjar tehsil of the district, Kullu Superintendent of Police Shalini Agnihotri said, adding the vehicle was en route Gada Gushaini.

The Kullu district administration announced an immediate relief of Rs 50,000 to the kin of each of the deceased and the injured.

Prime Minister Narendra Modi expressed his condolences to the families of those who lost their lives in the accident.

"Deeply saddened by the bus accident in Kullu. Condolences to the families of those who lost their lives. I hope the injured recover soon. The Himachal Pradesh Government is providing all possible assistance that is required," said Prime Minister Modi on the official twitter handle of PMO India.