Death toll from floods across India rises to 95, hundreds of thousands evacuated 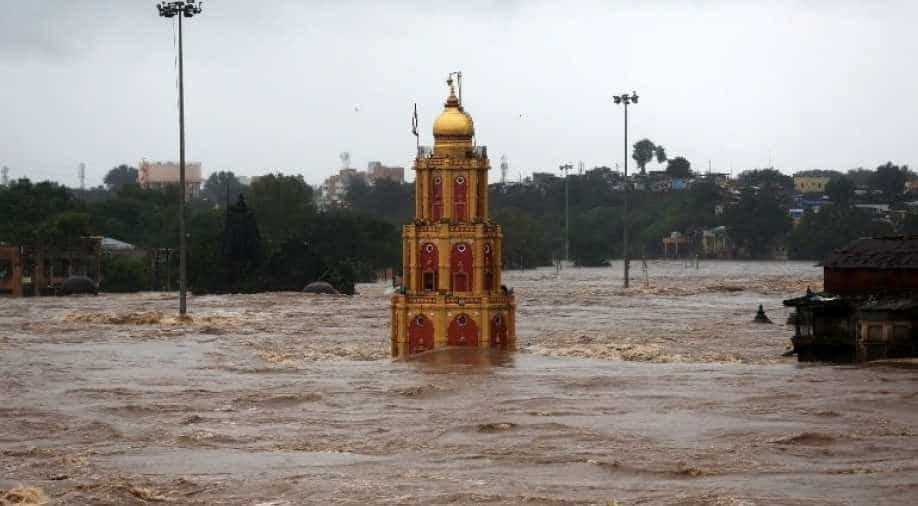 A temple is seen submerged in the waters of overflowing river Godavari after heavy rainfall in Nashik. Photograph:( Reuters )

Seasonal monsoon rains from June to September are a crucial lifeline for agrarian Indian society, delivering 70% of the country's rainfall, but they also bring in their wake death and destruction every year.

The death toll from floods in Karnataka, Kerala and Maharashtra rose to 95, official figures showed on Saturday, as heavy rain and landslides forced hundreds of thousands to evacuate their homes.

Seasonal monsoon rains from June to September are a crucial lifeline for agrarian Indian society, delivering 70% of the country's rainfall, but they also bring in their wake death and destruction every year.

Some 42 people died in southwestern Kerala and over 100,000 affected people have been evacuated, the central government's disaster management cell said, after 80 landslides hit the state in two days.

The state planned to open the gates of Banasurasagar dam in Wayanad district at 0930 GMT, Chief Minister Pinarayi Vijayan said during a news conference in the city of Kochi. Shutters of the dam were partially opened on Saturday morning to manage the water level and avoid serious damage, a senior state official of the district confirmed to Reuters.

A red alert, or severe rainfall and bad weather conditions forecast, has been issued for seven out of 14 districts in the state, the Kerala State Disaster Management control room told Reuters on Saturday.

Last year, Kerala was hit by one of its worst floods in one hundred years.

More than 200 people were killed and over 5 million affected.

The state's busiest airport, Cochin International Airport, has been closed since Friday as the taxiway is water-logged. The airport is expected to reopen from Sunday as water levels had started to recede, the state body said.

In neighbouring Karnataka, home to India's tech hub Bengaluru, some 24 people have died in what chief minister B.S. Yeddyurappa said on Saturday were the worst floods in 45 years.

Around 1,024 villages have been inundated due to the rains, several dams were reaching their full capacity, and over 200,000 people had been evacuated, he added.

As many as 16 of the state's 30 districts have been affected by the heavy rains and 235,105 people have been evacuated and shifted to 624 relief camps, Yeddyurappa added.

In Maharashtra, home to India's financial capital Mumbai, 29 people have died this week.

The Indian Meteorological Department said on its website that heavy to very heavy rain was likely to lash isolated areas of Kerala, parts of Karnataka and Maharashtra, and some southern states might also see extremely heavy rain on Saturday.