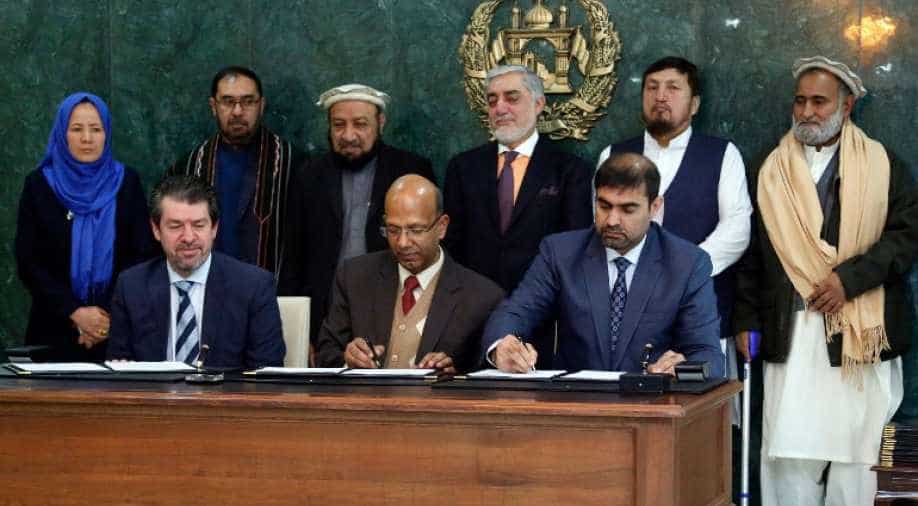 Since 2001, India has undertaken projects worth over $2 billion in Afghanistan. In 2016, India pledged to allocate an additional $1 billion over the next five years as part of its commitment to assist Afghanistan.

India has signed 11 memorandum of understanding (MoUs) with Afghanistan for 26 projects worth 9.5 million dollars. These projects include construction of classrooms, the building of orphanages, health clinics, canal protection walls and enhancing economic opportunities for women. The projects will be developed in seven provinces of Afghanistan-- Balkh, Ghor, Herat, Kabul, Bamyan, Badghis and Kapisa.

Today, together with HE Vinay Kumar @vkumar1969, India’s Ambassador to #Afghanistan @IndianEmbKabul, we signed MoUs for implementing 26 projects worth $9.5 million; part of 577 development projects at total cost of $120 million, funded by India from 2005-2021. #थैंक यू इंडिया pic.twitter.com/Oft9LsDYXs

The tripartite agreement was signed between the government of India, Afghan ministry of economy and implementing ministries such as education, energy and water, public health, justice, rural rehabilitation and development. Indian Ambassador to Afghanistan Vinay Kumar signed the MoU on behalf of India in the event which was presided over by Afghanistan's chief executive Dr Abdullah Abdullah at the Sapedar palace.

According to a release by the Indian embassy in Afghanistan, "These projects come under the ambit of community-based Small Development Projects (SDP) which are aimed at building capacities and capabilities of Afghan nationals and institutions for governance and delivery of public service, developing socio-economic infrastructure, securing and promoting livelihood options"

The development comes days after US President Donald Trump mocked India's Development assistance in Afghanistan and questioned the use of "library" India built in the country. US President in the first cabinet meet of 2019 had said, even though he gets "along very well with India and Prime Minister Modi", PM Modi "is constantly telling me, he built a library in Afghanistan" but he "Don’t know who’s using it (the library) in Afghanistan".

India immediately slammed the US with top sources telling WION, "Partnership is built on the specific needs and requirements worked out with the Government of Afghanistan. It is aimed at the welfare of the people of Afghanistan and for a tangible improvement in the lives of its people."

Since 2001, India has undertaken projects worth over $2 billion in Afghanistan. In 2016, India pledged to allocate an additional $1 billion over the next five years as part of its commitment to assist Afghanistan. India's development partnership in the country can be classified into five sectors--infrastructure development, humanitarian assistance, human resource development and capacity building, economic development, connectivity.

--India signs 11 MoUs with Afghanistan for 26 projects worth $ 9.5 million

--Projects will be developed in seven provinces of Afghanistan-- Balkh, Ghor, Herat, Kabul, Bamyan, Badghis and Kapisa.  --Projects part of 577 development projects funded by India from 2005-2021 worth $120 million