Dawood's 'safe haven' declines to even acknowledge his existence which is a real and present danger to us: India at UN 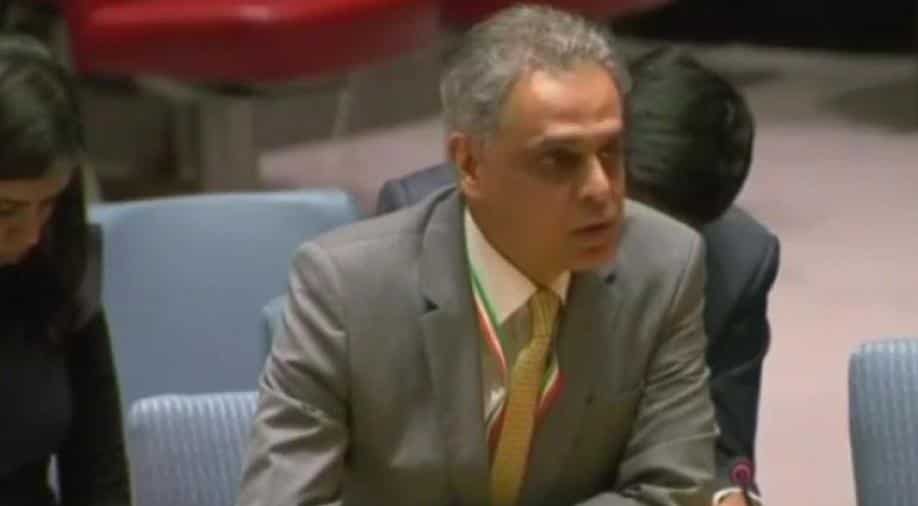 He said that the success achieved in denuding ISIL shows that the Council's focussed attention yield results and the same approach must be applied to address threats posed by the D company, Dawood Ibrahim and other proscribed entities.

India’s Ambassador and Permanent Representative to the United Nations in UN Security Council, Syed Akbaruddin, on Tuesday stated that a there has been a "mutation of Dawood Ibrahim’s criminal syndicate into a terrorist network known as the D-Company".

Akbaruddin further added that the illegitimate economic activities of this entity from a "safe haven" are known to the outside world, however, "for us, such activities as gold smuggling, counterfeit currency, arms and drug trafficking from a safe haven that declines to acknowledge even his existence, are a real and present danger," he noted.

He said that the success achieved in denuding ISIL shows that the Council's focussed attention does yield results and that the same approach when applied to address threats posed by the D company, Dawood Ibrahim and other proscribed entities such as JeM and LeT  "will serve us well".

Syed Akbaruddin in UN Security Council: .....as well as proscribed entities, including the Jaish-e-Mohammad and Lashkar-e-Toiba, listed as affiliates of Al-Qaeda, under the 1267 sanctions regime, will serve all of us well. https://t.co/JzIm6t0dAT

"Success of collective action to denude ISIL is a pointer that the Council’s focused attention can and does yield results. A similar degree of interest in addressing threats posed by proscribed individuals, such as Dawood Ibrahim & his D-Company as well as proscribed entities, including the Jaish-e-Mohammed and Lashkar-e-Taiba, listed as affiliates of Al-Qaeda, under the 1267 sanctions regime, will serve all of us well," Akbaruddin was quoted by news agency ANI.

An ANI report that came out earlier this month reported that Dawood Ibrahim is hiding in Pakistan.

A photograph of Dawood Ibrahim with Motiwala went viral indicating that the underworld don is in good health. The US is trying to extradite Motiwala, Dawood's close aide, over charges of money laundering, ANI reported.

While reacting on the recent developments, Lawrence Sellin, a US Army veteran and security expert tweeted, "Fugitive underworld don Dawood Ibrahim is believed to be a key facilitator in Pakistani Inter-Service Intelligence's narco-terrorist-jihadi operations and linked to the Dehiwala Sri Lankan drug distribution centre and possible funder of the Easter bombings."

Syed Akbaruddin: D-Company’s illegitimate economic activities may be little known outside, but for us, such activities as gold smuggling, counterfeit currency, arms & drug trafficking from a safe haven that declines to acknowledge even his existence, are a real & present danger. https://t.co/i3jo81Ev6D

Underworld criminal and terrorist, Dawood Ibrahim Kaskar is accused of the 1993 Mumbai bombings in which 257 people were killed and hundreds were injured.

India has asked Pakistan several times to hand over Ibrahim.

Last month at the UN, India reiterated its support for an "Afghan-led, Afghan-owned and Afghan-controlled" inclusive peace and reconciliation process in the war-torn country.

Akbaruddin, while speaking at an open debate on the situation in Afghanistan at United Nations Security Council, said that India stands committed to support the peace process, which promotes and protects unity, sovereignty, democracy, inclusiveness and prosperity of the country.

Akbaruddin said that while the country may be perceived as a "threat of transnational terrorism," it is the people of Afghanistan who have long been its victims.

In his address, Akbaruddin had stressed that the "sanctuaries and safe havens provided to" these terror networks need to be addressed for genuine and sustainable peace in the region.

"As the way forward is chalked out, we cannot ignore those groups enjoying the support and safe havens carry out violent and terrorist activities from across borders.