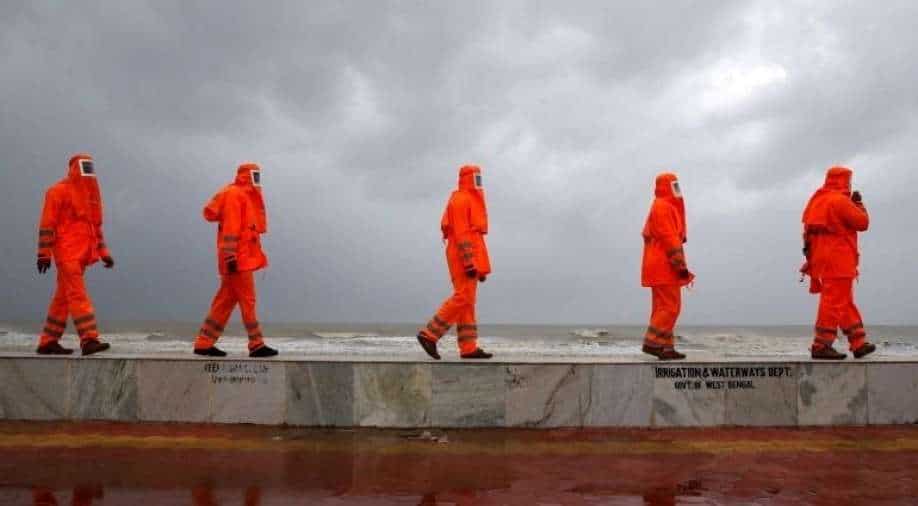 Last week Cyclone Tauktae claimed at least 155 lives in western India. The latest system, Cyclone Yaas, has forced the evacuation of more than 1.2 million people in the eastern states of West Bengal and Odisha

Heavy rains and howling winds lashed eastern India on Wednesday as the Covid-stricken country's second cyclone in as many weeks battered the coast, forcing more than 1.2 million people to seek shelter.

Many scientists say cyclones are becoming more frequent and severe in the northern Indian Ocean as climate change warms the sea.

Also read | One dead, 7 missing as country boats capsize in a river in Andhra Pradesh

Last week Cyclone Tauktae claimed at least 155 lives in western India. The latest system, Cyclone Yaas, has forced the evacuation of more than 1.2 million people in the eastern states of West Bengal and Odisha.

The Indian Meteorological Department said landfall began around 9:00 am (0330 GMT) and warned that it would generate waves higher than rooftops in some areas.

"We have been experiencing heavy rainfall and strong winds since last night," said Bibhu Prasad Panda, a resident of Balasore district in the storm's path.

"Several trees have been uprooted. The cyclone has also led to snapping of overhead electricity cables."

A tornado that preceded the storm left two dead electrocuted as it tore through West Bengal's Hooghly district, authorities said.

Kolkata, West Bengal's main city, ordered its international airport to shut down for most of Wednesday. The airport in Odisha's capital, Bhubaneswar, followed suit.

"Every life is precious," said Odisha's chief minister Naveen Patnaik as he appealed for people not to "panic" and to move away from the coast.

A record 4,800 disaster workers had been positioned in the two states, equipped with tree and wire cutters, emergency communications, inflatable boats and medical aid, the National Disaster Response Force said.

Both states are struggling with the coronavirus wave that has left more than 120,000 dead across India in the past six weeks.

While masks have been distributed in emergency shelters and relief workers are trying to impose social distancing, many officials fear the new cyclone will only speed up the spread of the virus.

"This cyclone spells double trouble for millions of people in India as there is no respite from COVID-19," said Udaya Regmi, South Asia head of the International Federation of Red Cross and Red Crescent Societies.

The storm "is a terrible blow for many people in coastal districts whose families have been struck down by Covid-19 infections and deaths," West Bengal state minister Bankim Chandra Hazra told AFP.

Hazra added that it would be "a big challenge" to maintain social distancing in the emergency shelters.

Some vaccination centres in threatened districts as well as Kolkata suspended operations because of the storm and a special operation had been launched to ensure the supply of oxygen and medicines to hospitals, officials said.

Officials in neighbouring Bangladesh, a regular target of cyclones, said they expected the low-lying delta nation to be spared this time.

Some of the deadliest storms in history have formed in the Bay of Bengal, including one in 1970 that killed half a million people in what is modern-day Bangladesh.