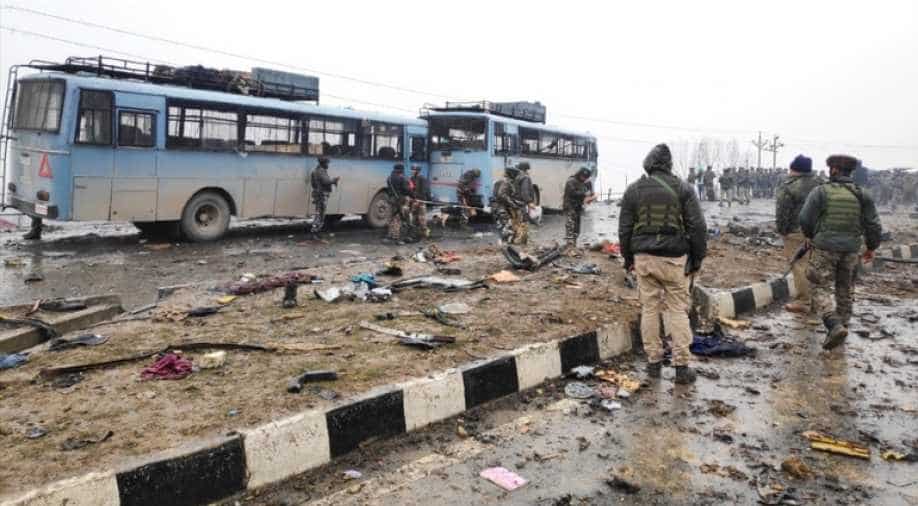 A Jaish-e-Mohammed terrorist rammed an explosive-laden vehicle into a bus carrying CRPF jawans on Thursday in Jammu and Kashmir's Pulwama.

A Jaish-e-Mohammed terrorist rammed an explosive-laden vehicle into a bus ferrying CRPF jawans on Thursday in Jammu and Kashmir's Pulwama. The attack left 40 people dead.

Officials said there were a total of 42 people in the bus including the driver. The attack on the bus — it was travelling in a convoy — took place at 3.15 pm near Awantipora. There had been 70 vehicles in the convoy which had been transporting 2,500 personnel from Jammu to Srinagar.

K Vijay Kumar, Advisor to J&K Govt to ANI: Death toll in #Pulwamaattack is around 40 pic.twitter.com/mUPCRcZnhz

The attack also left dozens injured — body parts could be seen strewn around the site of the attack — and a steadily-climbing death toll. The first reports had said eight CRPF personnel had died; that figure quickly turned into 12, and then continued to climb upwards.

Officials said the terrorist was carrying over a 100 kgs of explosive in his vehicle. He had been driving on the wrong side of the road and rammed head-on into the CRPF bus.

The Jaish-e-Mohammed claimed responsibility for the attack in a text message sent to the Kashmiri news agency GNS.

The terrorist who carried out the attack was identified as Adil Ahmad Dar from Kakapora in Pulwama; pictures and video of him began to flood social media soon after the attack.

Prime Minister Narendra Modi condemned the "despicable" and "dastardly" attack, saying "the sacrifices of our brave security personnel shall not go in vain".

Modi added that he had spoken with Home Minister Rajnath Singh about the situation in Kashmir.

He also spoke with National Security Adviser Ajit Doval who, ANI reported, was overseeing the situation in Kashmir and being briefed by senior CRPF officials.

#WATCH: Home Minister Rajnath Singh, says,"The attack was carried out by Pakistan backed Jaish e Mohammed. A strong reply will be given and I assure the people of the country this." #PulwamaAttack pic.twitter.com/OdhLUtNK8h

Singh meanwhile said that "the attack was carried out by the Pakistan-backed Jaish-e-Mohammed".

He added that "a strong reply will be given and I assure the people of the country this".

K Vijay Kumar, adviser to the government of Jammu and Kashmir, told ANI that the National Investigation Agency (NIA) would join the investigation into the attack.

Sources meanwhile said the Cabinet Committee on Security would meet at 9:15 am on Friday.

Sources: Cabinet Committee on Security to meet at 9:15 AM tomorrow pic.twitter.com/N2qMtmezx4