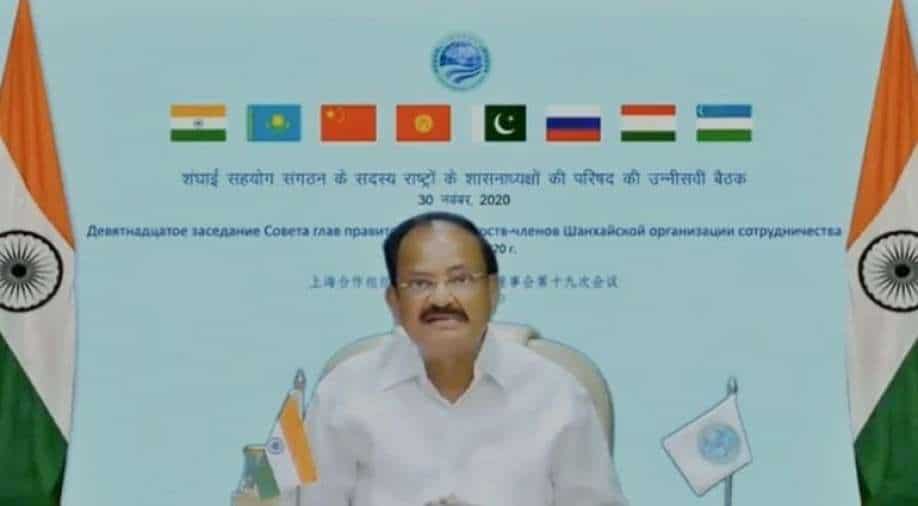 This is the first time since India became a member of the SCO in 2017, that it hosted such a large meet of SCO leaders

India strongly raised the issue of cross border terrorism from Pakistan and attempts to raise the bilateral issue at the Shanghai Cooperation Organization (SCO) heads of government meet.

India's vice president Venkaiah Naidu said, "The most important challenge faced by us in the region is terrorism, particularly cross-border terrorism. Terrorism is truly the enemy of humanity. It is a scourge we need to collectively combat."

Pointing at Pakistan Naidu explained, "We remain concerned about threats emerging from ungoverned spaces and are particularly concerned about States that leverage terrorism as an instrument of state policy. Such an approach is entirely against the spirit and ideals and the Charter of the Shanghai Cooperation Organization."

This is the first time since India became a member of the SCO in 2017, that it hosted such a large meet of SCO leaders. It was expected to take place physically but took place virtually due to the COVID pandemic.

India's Vice President also raise the issue of Pakistan trying to raise bilateral issues at the grouping. He said, "It is unfortunate to note that there have been attempts to deliberately bring bilateral issues into SCO and blatantly violate the well-established principles and norms of SCO Charter safeguarding the sovereignty and territorial integrity of SCO Member States."

Pakistani NSA earlier this year, sat in SCO virtual meet with a map of Pakistan which showed incorrect boundaries of India, irking New Delhi. In fact, Russia, which is the host of the grouping this year, also said, bilateral matters should not be raised at the body.

Meanwhile, COVID also remained a key focus of New Delhi, which highlighted how it has "been at the forefront of producing quality medicines and vaccines at low cost."

But Naidu also called for, "much needed reforms to our global institutions, including WHO, and rework our development strategies to face a post-COVID-19 world."

World Health Organisation or WHO has been at found missing when the pandemic broke towards the end of 2019, for which it has been criticised.

India offered to annually host the Special Working Group on Startups and Innovation and also the SCO Startup Forum. On the shared cultural front, India earlier on Monday inaugurated an Exhibition on Buddhist Heritage of SCO Member States in a virtual format, hosted by the National Museum of India.