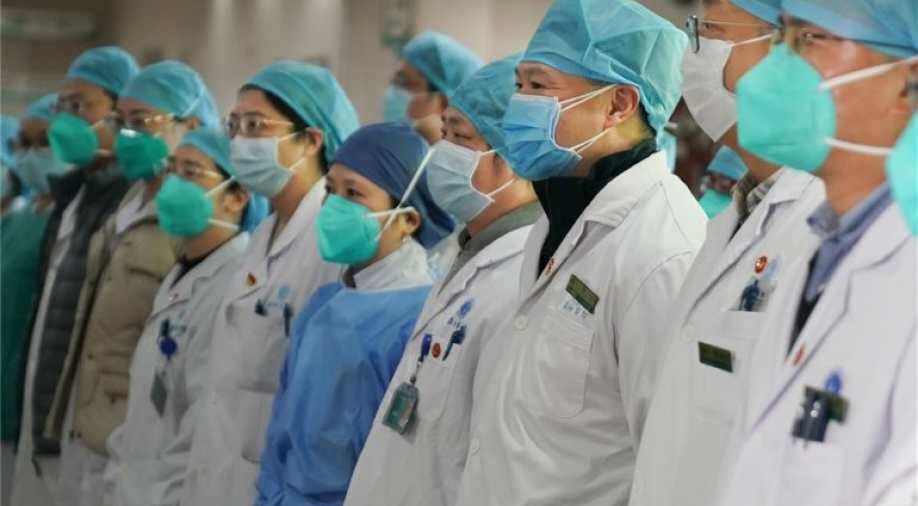 The medical staff of Union Hospital affiliated to Tongji Medical College of Huazhong University of Science and Technology attended a ceremony to form an "assault team" in the fight against pneumonia caused by the novel coronavirus in Wuhan. Photograph:( IANS )

She was admitted on January 21 with respiratory illness and transferred to the ICU with stomach problems, nausea and fever.

A patient suspected to be suffering from Coronavirus died at a private hospital in Kolkata. The patient was a Thai national and was living in Kolkata since November of 2019. She was admitted on January 21 with respiratory illness and transferred to the ICU with stomach problems, nausea and fever.

West Bengal Health Department officials have sought all test reports of the deceased and the Thai Consulate General has been informed of the patient's demise.

State Health Department officials issued a statement saying that the symptoms of the Thai national were unlikely to be that of the deadly coronavirus. “Necessary samples have been sent to the state-run Beliaghata Infectious Diseases Hospital for tests. Results are yet to come,” they added.

Delhi's Dr Ram Manohar Lohia Hospital also received reports of three suspected cases of coronavirus. Blood samples collected from the three men between the ages of 24 and 48 have been sent to the National Centre for Disease Control.

A man hospitalised in Pune is presumed to have been exposed to the virus during his recent visit to China and is now the sixth admission of suspected infections in Maharashtra so far.s

First possible case of the virus in Punjab was from a 28-year-old Mohali resident who showed coronavirus-like symptoms has been admitted to the isolation ward of the PGIMER after returning from China;

China, meanwhile, is expanding a massive effort to contain the viral outbreak that has killed more than 100 people nationwide and has urged all citizens to postpone trips abroad.

The National Immigration Administration issued a statement justifying the recommendation to delay non-essential travel by asserting that it was to protect the health and safety of Chinese and foreign people.