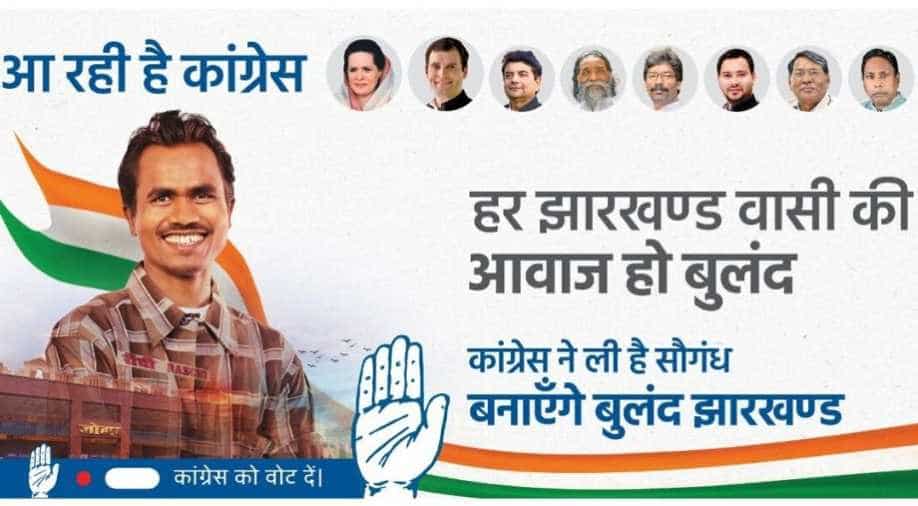 The low-key Congress campaign is focused on local issues and has avoided taking Modi-Shah combine on any of the polarising statements.

The low-key Congress campaign is focused on local issues and has avoided taking Modi-Shah combine on any of the polarising statements. Even senior Congress leaders who were roped in for campaign were asked to limit themselves to issues of the state. The best example was the press conference by former finance minister P Chidambaram, who spoke on the economy and then went on to address local issues. Sources in the Jharkhand Congress said that the state unit also did not invite controversial and controversy making leaders to ensure that attention is not diverted to non-issues.

Even the posters issued by the Jharkhand Congress are very different in design and content. The posters do not showcase central leadership of the party. It showcases the issues which the party has taken up in the state. Even the tagline, “AA RAHEE HAI CONGRESS” has been promoted without adding a face to it. This is very different from Gujarat and Karnataka campaigns where Rahul Gandhi was pitched as the face of the election.

A functionary closely associated with the election campaign told WION that the Jharkhand campaign took the cue from the Chhattisgarh elections where Congress swept the state. Chhattisgarh also witnessed a very low-key campaign unlike Madhya Pradesh and Rajasthan in 2018.

Congress has picked up the issue of land acquisition and promised to return the land to the tribal's under a new scheme. The campaign is also focused on the issue of malnourishment, death of children due to lack of food, women safety and unemployment. Congress has also taken special care not to get tripped by the Pathalgadi rebellion issue which led to largescale violence in the state.

Like Chhattisgarh, procurement price for rice and farmers' loan has been a prominent part of the election campaign. Chhattisgarh CM Bhupesh Baghel too was looped into the campaign by the Jharkhand Congress. Congress is a junior partner to Jharkhand Mukti Morcha (JMM) in the state. This time the Congress ensured that it settles seats even if it didn’t suit their interest in order to stitch the alliance. JMM is contesting in 43 seats, Congress 31 and RJD in 7 seats in the state.

The data shows that there was a dip of 10 per cent of votes immediately after the Lok Sabha elections even in 2014. Similarly, BJP’s vote share dipped in the Haryana assembly election in 2019. This has made small parties like JMM and Congress slightly confident. Though BJP remains the dominant party in Jharkhand, it does not have friends in the local set up. Congress, on the other hand, is heavily banking on 26 per cent of Adivasis and 14 per cent of Muslim votes for electoral success.

Though the BJP created a very successful non-tribal polarization in 2014, it failed to get a simple majority in the house of 81 in the state. BJP secured 37 seats in the election followed by 19 of JMM.

In 2014, BJP had contested 72 seats and now it is contesting 79 seats. Only support it can expect is from AJSU as it decided not to field a candidate against Sudesh Mehto. The last phase of polling is on December 20th and counting will take place on December 23rd.

An upset in Jharkhand after Maharashtra can act as a glue to bring the Opposition parties together once again to fight a dominant BJP nationally and in states. BJP apart from local issues is facing incumbency which flows from Chief Minister Raghubar Das himself.