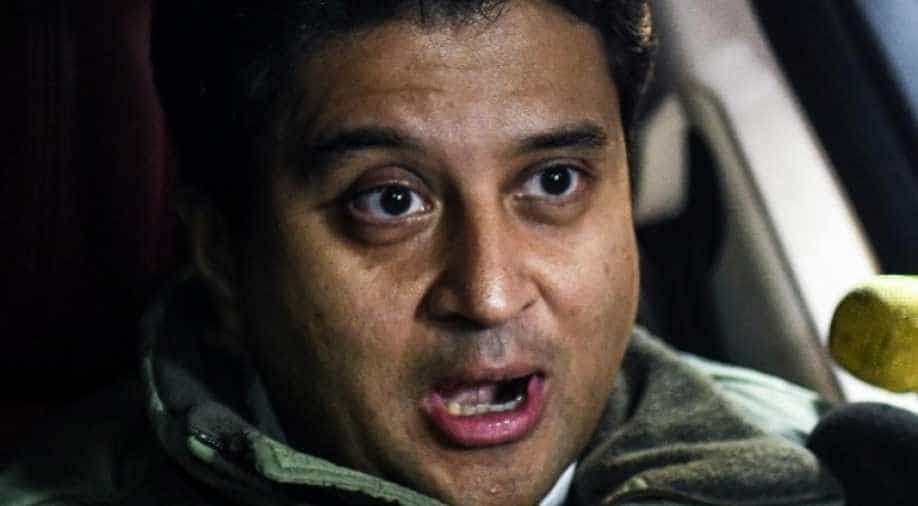 Congress' prominent youth leader Jyotiraditya Scindia quit the party on Tuesday and appeared set to join the BJP amid a rebellion in Madhya Pradesh by his supporters, pushing the 15-month-old Kamal Nath government to the brink of collapse.

Several Congress leaders slammed Jyotiraditya Scindia on Tuesday for quitting the party, accusing him of betraying the trust of the people and placing "personal ambition" over ideology.

Hitting out at Scindia, many Congress leaders referred to the 1857 revolt against the East India Company and the role of the Scindia royals back then as well as Vijaya Raje Scindia's switch from the Congress in 1967.

Congress' prominent youth leader Jyotiraditya Scindia quit the party on Tuesday and appeared set to join the BJP amid a rebellion in Madhya Pradesh by his supporters, pushing the 15-month-old Kamal Nath government to the brink of collapse.

A shell-shocked Congress, in a largely symbolic move of no consequence, expelled Scindia, the party general secretary and scion of the erstwhile Gwalior royal family, on charges of anti-party activities.

Reacting to the development, Rajasthan Chief Minister Ashok Gehlot accused Scindia of betraying the trust of people and ideology, saying people like him cannot thrive without power and the sooner they leave, the better it is.

"Joining hands with the BJP in a time of national crisis speaks volumes about a leader's self-indulgent political ambitions, especially when the BJP is ruining the economy, democratic institutions, social fabric and as well the judiciary," he said on Twitter.

Congress leader in Lok Sabha Adhir Ranjan Chowdhury said ideology did not matter to Scindia, and claimed that "political convenience" and "personal ambition" played a major part in his decision to quit the party.

Chowdhury alleged that some sort of "allurement and enticement" offered by the Bharatiya Janata Party had convinced Scindia to switch over from the Congress.

"It is sad news for the Congress party because Jyotiraditya Scindia had been nurtured by the party over the years," Chowdhury told.

"He had been entrusted with important jobs by the party. But now the situation had come to such a pass that he found it more convenient to switch over to the other party," he said.

Reacting to the development, senior party leader Jairam Ramesh said, "The father had once called the BJP 'Deshdrohis'. Wonder what he would be thinking of his son joining that gang?"

Some leaders also voiced concerns over the state of the party.

"He was a central pillar in the party and the leadership should've done more to convince him to stay. Like him, there are many other devoted INC leaders across the country who feel alienated, wasted and discontented," he said.

"India's oldest party needs to empower young leaders who have the capacity to work hard and resonate with the masses," said Bishnoi, the son of former Haryana chief minister Bhajanlal.

Meanwhile, Madhya Pradesh state minister Jitu Patwari made a reference to the 1857 Revolt against the East India Company as well as Scindia's grandmother, Vijaya Raje Scindia, quitting the Congress in 1967 to state that something similar was happening.

Gaurav Pandhi, national coordinator for social media in the Congress, said, "A traitor is a traitor and no amount of arguments and reasoning can justify treachery. Period!"

Referring to the rebellion in Madhya Pradesh Congress, the party's Karnataka unit chief, Dinesh Gundu Rao, said it was time for Rahul Gandhi to lead the party from the front and make drastic changes at the top.

Earlier in the morning, senior Congress leader Digvijay Singh parried questions on the exact number of MLAs supporting the party in Madhya Pradesh amid a political crisis triggered by the resignation of Jyotiraditya Scindia and 14 MLAs loyal to him.

Repeating his allegation that the BJP was trying to destabilise the Congress-led government, Singh told reporters that the BJP had arranged three chartered planes for Bengaluru on Monday to fly out some MLAs loyal to Scindia.

On Tuesday morning, as much of India was celebrating Holi, Scindia met senior BJP leader and Union Home Minister Amit Shah, following which he called on Prime Minister Narendra Modi at his 7, Lok Kalyan Marg residence.

There was no official word on what transpired at the meetings. However, BJP sources asserted that the decision of the party's top two leaders to hold long deliberations with Scindia underlined the importance they attach to him.