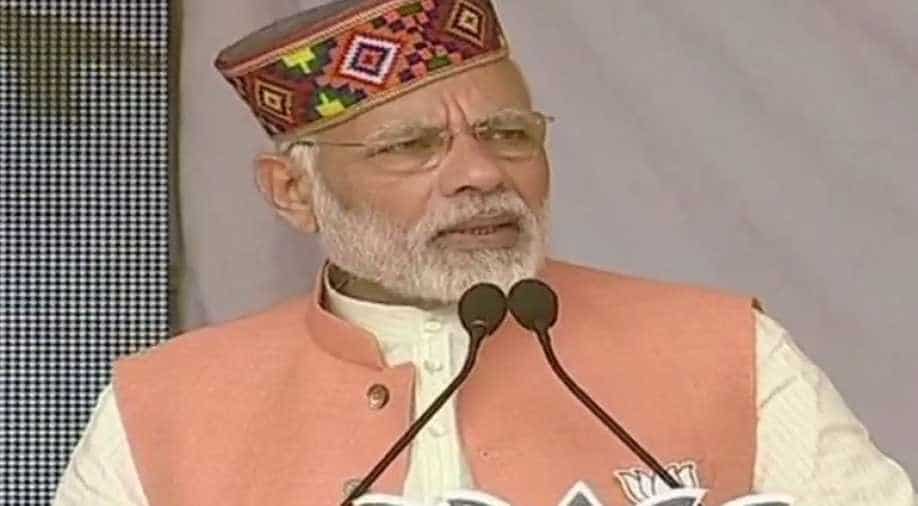 "Never has there been a one-sided election as seen in this election. The reason for this is that the country knows what the Congress government is like and what its intentions are," Modi said. Photograph:( ANI )

"Former prime minister Indira Gandhi refused to carry out note ban. Had she done note ban when needed, I would not have had to carry out this big task,'' said Prime Minister Narendra Modi.

Stressing that the implementation of demonetisation policy was required in 1971, but it was implemented by the BJP government, the prime minister added.

After Modi announced the demonetisation of high-value currency on November 8, 2016, several BJP leaders have hit out Indira Gandhi and said she lacked the courage to go ahead with the demonetisation, though she was advised to do so.

Fmr PM #IndiraGandhi refused to carry out note ban.Had she done note ban when needed, I would not have had to carry out this big task: Modi.

Attacking the Congress on the issue of corruption, Modi accused the previous Congress-led government at the Centre of abusing subsidies worth Rs 57,000 crore. He claimed he had stopped this misuse, and the money was now being used for the welfare of the poor.

"Over Rs 57,000 crore in subsidies were looted by middlemen. Modi has stopped all this and this money is now being spent for the welfare of the poor," he said, holding that this was the reason for the Congress's attack on him.

Rs 4,000 cr fraud found in probe into 5,000 companies out of 3 lakh that have shut down after #demonetisation: PM @narendramodi.

He also took a dig at former Prime Minister Rajiv Gandhi for his statement that out of one rupee spent from Delhi, only 15 paisa reached the villages, saying that Gandhi was merely painting a picture of what the Congress did when it ran the country.

Gandhi, he added, was a doctor who diagnosed the problem of corruption but did nothing about it.

Modi wondered where the 85 paise went.

"Who was that magician? Or which 'panja' (palm) was used to steal that money," he asked, in an apparent reference to the Congress's electoral symbol, the palm.
On GST, Modi said no businessman or business body had opposed the new tax regime, and the government was doing everything to resolve the problems of traders and shopkeepers after taking all states on board.

"If there is a problem in any corner of the country, we discuss and seriously think about it and try to resolve it. The GST Council last month resolved all the problems of businessmen arising out of the one tax law," he said.