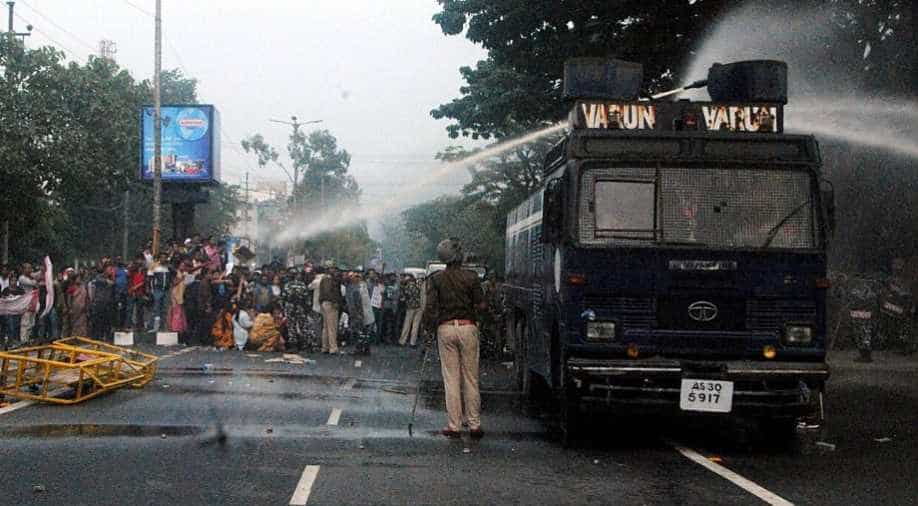 Police officials use water canon on the activist during the protest against Citizen Ambedenment bill near Assam Secretariat at Dispur in Guwahati. Photograph:( ANI )

Assam's Guwahati city and Dibrugarh district have been placed under indefinite curfew till further orders. Mobile services have also been suspended for 48 hours starting from today.

One protestor was killed and three others were injured after police opened fire at the protestors.

According to reports, the police opened fire after the protesters hurled stones at the convoy of a foreign delegation.

"I appeal to the people to maintain peace and not get misled", the Chief Minister said.

Meanwhile, in view of the prevailing situation, four flights from Assam's Dibrugarh airport were cancelled; while all passenger train operations to Assam and Tripura have been suspended. Twelve companies of the railway protection force have also been moved to Assam.

The domestic Ranji trophy cricket matches scheduled to have been held in Assam and Tripura also stand suspended.

Earlier in the day addressing a rally at Jharkhand, Prime Minister Narendra Modi assured the people of Assam that there is nothing to worry about.

"I assure the people of Assam, especially the youth, that they should not worry. Nobody can snatch your rights, Your culture, language and tradition will be safeguarded by Clause 6 of Assam Accord," he said at a rally.

The Citizenship (Amendment) Bill, 2019 sailed through the Parliament after Rajya Sabha passed it on Wednesday.

As many as 125 members of the Upper House voted in favour while 105 MPs voted against the Bill, which was passed by Lok Sabha earlier this week.

The Bill seeks to grant Indian citizenship to refugees from Hindu, Christian, Sikh, Buddhist and Zoroastrian communities fleeing religious persecution from Pakistan, Afghanistan, and Bangladesh and who entered India on or before December 31, 2014.