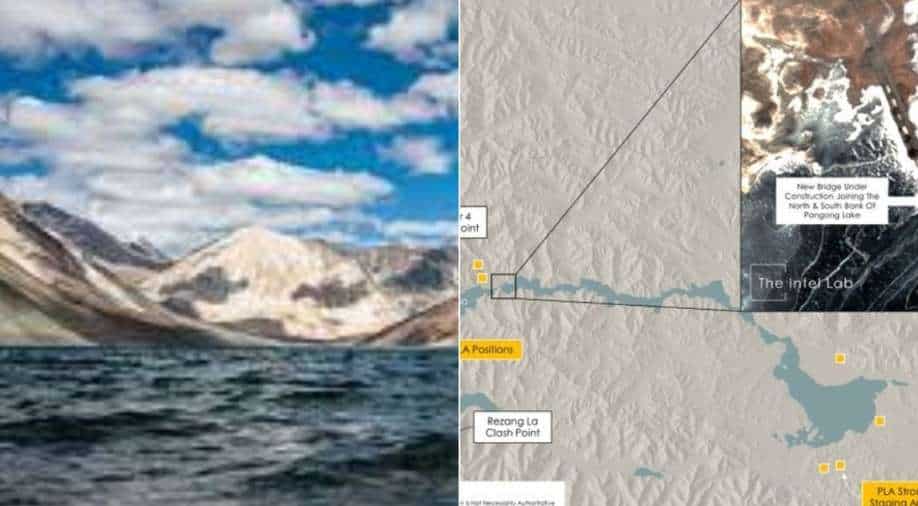 As per reports the bridge is being constructed more than 20km east of Finger 8 on the lake's north bank. Photograph:( Others )

Apart from the media reports, satellite imagery accessed by geo-intelligence expert indicates that China is constructing a bridge across Pangong Tso lake in eastern Ladakh

China is reportedly constructing a new bridge across Pangong Tso lake in eastern Ladakh. However, it is being constructed across a part of the lake that falls within Chinese territory, as per the reports.

The bridge will help China's People's Liberation Army (PLA) to deploy troops closer to the Line of Actual Control (LAC). Also, the movement of troops is expected to be faster between the north and south banks of the lake.

The Indian Express reported citing sources that the bridge is being constructed more than 20km east of Finger 8 on the lake's north bank. Important to note here that India says Finger 8 denotes the LAC.

Media reports of #PangongTso allege a new bridge is under construction connecting the north & south bank of the lake, in turn enhancing road connectivity for #China's troops in the area, GEOINT of the area identifies the location & progress of the alleged structure https://t.co/b9budT3DZZ pic.twitter.com/IdBl5rkDhR

These bridges and roads are constructed with an aim to ensure the swift movement of troops at borders with China and Pakistan. It is understood that the Flag Hill-Dokla road will reduce the travel time for Indian troops to reach the Dokla area near the Doklam plateau where a stand-off took place between Indian and Chinese armies in 2017.

The ties between India and China deteriorated after in June 2020, 20 Indian soldiers were killed in action in a violent faceoff in the Galwan river area. Meanwhile, India said China suffered more than 40 casualties but China reiterates says four of its soldiers were killed.

After over a year later in July last year, India and China agreed to mutually withdraw 2km from the clash site.

On the other hand, a latest report an India-based news agency ANI, citing sources, stated that China has deployed around 60,000 troops opposite the Indian territory in Ladakh.

In May last year, the Indian Defence Ministry in its Year-End review had stated that unilateral and provocative actions by the Chinese to change the status quo by force, in more than one area on the LAC, has been responded to as an adequate measure.

As per the ANI report, to resolve the issue, the militaries of the two countries have been engaged in dialogue at various levels. After sustained joint efforts, disengagement was carried out at many locations.