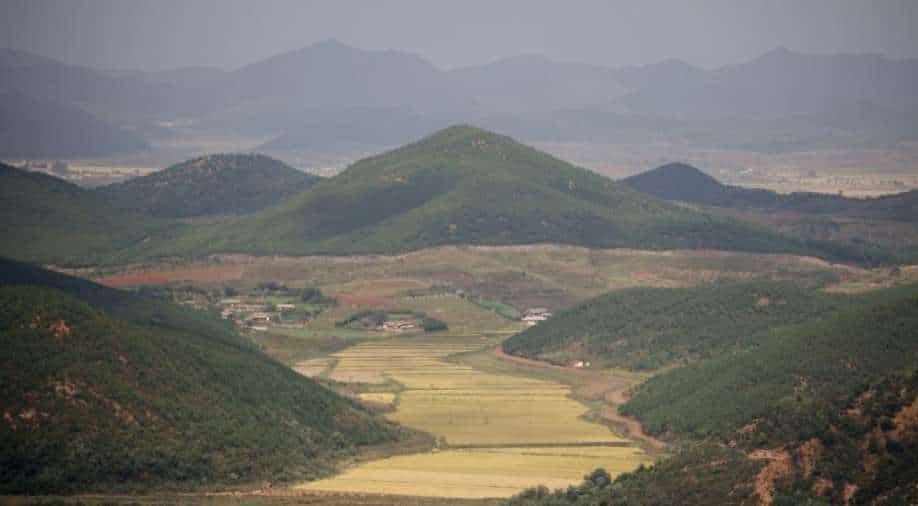 This file photo is taken from the top of the Aegibong Peak Observatory, south of the demilitarised zone (DMZ), separating the two Koreas in Gimpo, South Korea. Photograph:( Reuters )

The Ministry of National Defense said in a statement: 'The authorities presume the person is a North Korean defector and are in the process of verifying related facts'

The person who entered North Korea on New Year's Day in a rare crossing of the heavily fortified border from the South is believed to be a defector from the North, the defence ministry in Seoul said Monday (January 3).

A defence ministry official said that the man in question is believed to be someone who came from North Korea in 2020 - also by breaching the border.

South Korea's Joint Chiefs of Staff (JCS) informed that they had launched a search operation after their surveillance equipment detected that an unidentified person was moving into North Korean territory across the eastern portion of the border on Saturday.

The Ministry of National Defense said in a statement: "The authorities presume the person is a North Korean defector and are in the process of verifying related facts."

As per a Reuters report, a ministry official later said that they believe the man, who is in his 30s, came to the South in November 2020.

"Footage showed he had an identical look and dress as the person who defected from the North in 2020," the official said.

Local media outlets have reported that the man had experience as a gymnast that helped him scale the fences, however, there is no official statement or confirmation on the same.

As per the official, North Korea has not provided details about the breach but has acknowledged the South's messages on inter-Korean hotlines about the incident.

It is also important to note that the investigators are seeking to determine whether North Korean troops were involved in any way but so far, there is no information that can tell that the South Korean government is thinking it is a case of espionage.