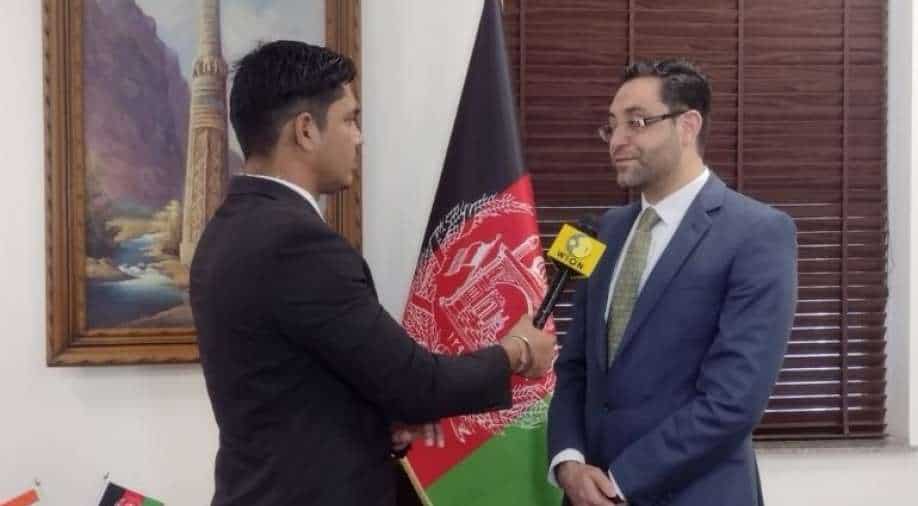 The envoy called for more visas by India for Afghans, especially students who have to continue their studies in Indian universities

Afghanistan’s envoy to India Farid Mamundzay has warned of a "catastrophic situation" in his country.

"People are not getting paid on time, there is little business activities. There is a humanitarian crisis, unfolding economic crisis," he said.

Since the Taliban's takeover in August, the country has slid in every parameter, even as the onset of winters has worsened the situation in the country.

Speaking to our diplomatic correspondent Sidhant Sibal, Mamundzay thanked New Delhi for its pledge to send 50,000 MT of wheat to the country.

He said, 'India has time and again proved to be a close and reliable friend of the Afghan people and stood by us at a difficult time." The envoy called for more visas by India for Afghans, especially students who have to continue their studies in Indian universities.

In the first-ever extensive interview to any India-based channel since the Taliban takeover in August, envoy Mamundzay pointed how the last four months have been "difficult, emotionally and administratively and financially" for the mission and its diplomats but he pointed, "We can't pack up and leave. We have moral obligations and responsibility towards our people and country to continue serving them."

WION: Your reaction to the humanitarian support of 50,000 MT of wheat to the Afghanistan people?
Farid Mamundzay: Yes, India has time and again proved to be a close and reliable friend of the Afghan people and stood by us at a difficult time. The generous act of helping us with 50,000 MT of wheat with lifesaving medicines and half a million covid vaccines is something that is greatly needed in times of crisis and we are grateful for this assistance and support.

WION: But there are certain challenges, given it as to use Pakistani territory, and do you expect more such humanitarian support?
Farid Mamundzay: Yes, that was something that was greatly discussed by the Afghan embassy and the Indian government, and the quickest route we found was Pakistan that will take a short period of time to send much-needed assistance to Afghanistan quite quickly. So I hope Pakistan would continue to assist us as they have indicated that they will allow this convey to transit through Pakistan. I hope that spirit will continue in Islamabad to allow the lifesaving drugs and wheat to flow into Afghanistan. The need is dire. The world food program estimates that around 9 million people require urgent food assistance. by end of next year, there will be 3 million malnutritional children. The need is huge and I hope more countries in the region and the globe will come in and elevate the suffering of Afghan people. There were billions of dollars and euros pledged by the international community in Europe last month. I hope more and more assistance would come to help our people at this difficult time.

WION: How difficult the situation is in Afghanistan, especially with the onset of the winter
Farid Mamundzay: The winter is approaching rather fast; most banks are not operating as they were doing in the past. People are leaving in large number for many countries in the region and for western countries and capitals. People are not getting paid on time, there is little business activity. Teachers, Doctors are not being paid. There is a humanitarian crisis, an unfolding economic crisis, it's a catastrophic situation right across the country. The New Taliban regime hasn't been recognized by any country, even after 4 months. It's a difficult situation ordinary Afghans are facing; a lot of challenges and it is time for the international community to rescue and support Afghan people who are facing a difficult time after 20 years of a rather stable period in their lives.

WION: What more do you expect from New Delhi, especially on the issue of visas, visas for Afghan students.
Farid Mamundzay: We require a lot of assistance from India in terms of humanitarian assistance at this stage. Together with humanitarian assistance we also need visa support. India so far has been kind to issue Afghans 200 visas but for a nation of 40 million people, it is five visas per million people that is certainly not enough and we expect India to help us during this difficult time. There are more than 2500 students stranded in Afghanistan who are in the middle of their studies, some of them in their second and third years. So if they don't come here, resume, and continue their studies they will lose whatever they have done in the past--those 2-3 years are going to be wasted. So, I request the Indian government to consider granting those students visas and consider them bringing them to India. Also, 50,000 people who came here for medical treatment annually, are people with fatal medical conditions. Those people are willing to here for medical treatment. So, people who have a long history of travel to India should be considered. We consider India our historic friend and a strategically and in this difficult hour that hand of cooperation is expected from millions of Afghans to be extended. We hope that policy will be continued to evolve and change and our needs will be considered.

WION: How has been the situation in Afghanistan, politically since the Taliban takeover.
Farid Mamundzay: Well past four months we are going through an economic, political, and social freefall. The gains of the last 20 years have sadly been reversed or being reversed as we go into the future. So there is not any positive development on many fronts on political, social, and other fronts. The hope of the Afghan people is that we the Afghans reach a stage where we form an inclusive government, where the Taliban will allow shape a government that will be inclusive, where we would have true and fair representation of the entire country. And women would be given due rights, their rightful position in the Afghan society. They make up half of our population and they should be treated with rights, and they deserve dignity and respect. Women should be allowed to go to school and do their jobs. So there are expectations and we hope the international community will continue to engage the Taliban in order to encourage them to take appropriate steps required to put Afghanistan back on a trajectory where people of that country deserve to live a dignified life and not put Afghanistan through a stage where it will become a safe haven and a hub for regional and international terrorism. I hope that would not be repeated and there would be steps taken in order to avoid that.

WION: What is the status of the Afghan embassy, globally, and this one and financial crisis they have been facing...
Farid Mamundzay: Well for the past four months has been difficult, emotionally and administratively, and financially. Most of the missions including here in India have not been receiving assistance that we used to get in the past from Kabul. But the spirit of our staff is high and they continue to serve the Afghan community and consular service have been running normally. Our focus in India has been on 3 main elements-- we focus greatly on humanitarian and relief assistance, wheat, covid vaccines, medicines and warm clothes, and things that are greatly needed in Afghanistan. So we are largely focused on working on humanitarian assistance to be challenged from India to Afghanistan in close coordination with relevant UN agencies like the world food progamme, world health organisations, and other relevant authorities. The second focus has been to provide consular services. There are 100,000 Afghan citizens living in India who require regular consular services and support. So, our focus is not to hinder, hamper or delay those services. services provisions for our community. The third is educational support for our students. Still, over 15000 Afghan students in India require ongoing support. These three areas are areas of main engagement, along with other diplomatic engagement with the host country here in India and other diplomatic missions. Life has been somewhat different, challenging. We can't pack up and leave. We have moral obligations and responsibility towards our people and country to continue serving them.