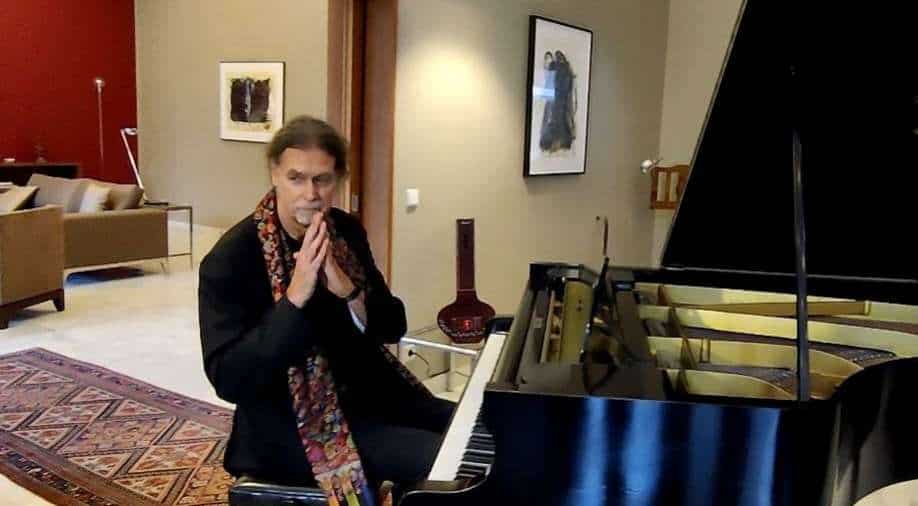 40 years ago, I visited India and experienced it for myself. Now I am leaving as an ambassador, but this travel is by no means over, so it will be a destination for me for the next 20 years and I will come back. Photograph:( WION Web Team )

Speaking to WION's Diplomatic correspondent Sidhant Sibal, Envoy Lindner said, "We in Europe had a very strong and big dependency from Russian energy, we still have. So, what we are doing, is to try to reduce, reduce, reduce and by end of August we will have zero imports of Russian oil"

The outgoing German envoy to Delhi Walter J. Lindner has said that India can't be "finger pointed" for importing Russian oil and that "every country has different history, different position, dependencies". Indian commercial traders are increasingly trying to get cheap Russian oil as western sanctions are imposed on Moscow in the aftermath of its invasion of Ukraine. Speaking to WION's Diplomatic correspondent Sidhant Sibal, Envoy Lindner said, "We in Europe had a very strong and big dependency from Russian energy, we still have. So, what we are doing, is to try to reduce, reduce, reduce and by end of August we will have zero imports of Russian oil. Coal is gone right now".

He said that India should be "invited all the time to G7". Germany is the chair of the grouping this year and will be hosting the summit from 26 to 28 June 2022 at Schloss Elmau in the Bavarian Alps. Indian PM Modi travels to the G7 summit in Germany later this month. Last month too he was in Berlin for the inter-governmental consultations.

A well-known Indophile, the envoy in the past is a top German diplomat and Germany's foreign secretary to India. As his three and half year stint in India comes to a close, he retires soon.

What is interesting is his first impression of India came from watching the 1971 "Concert for Bangladesh" by George Harrison and Ravi Shankar. The young Walter J. Lindner worked as a truck driver and in McDonald's to collect money to visit India. Asked about his love for India, in his last interview as the envoy, he said, "Now I am leaving as an ambassador, but this travel is by no means over, so it (India) will be destination for me for next 20 years and I will come back." He is a trained musician.

WION: What has been the most challenging part of your India tenure?

Walter J. Lindner: I think the last three and a half years for everyone, not only diplomats, journalists, everyone has been very different because you know I arrived in spring 2019 and we had normal diplomatic life, we had the chancellor here, members of the parliament and interaction with many people but then came Covid and it took away 2 years of interacting with people. It was lockdown, you could not fly, you could not meet people.

2 years were gone and then we had Ukraine and which always dominated discussions. This is kind of a very peculiar 3 and half year period. We started well with the chancellor coming here and we ended 3 and half years well with your PM coming to Germany and coming to Germany again in a few weeks. So I think, things have started to be normal again, at least normalisation is starting and so I am looking for my successor.

WION: The Indian PM is expected to visit Germany for the G7. How do you see Indian PM Modi's presence and what will be the key priority for the summit?

Walter J. Lindner: I think it is very important that India is there, and already for a few years, India has been a permanent invitee there. It is important, given the 1.3 billion people in the country, the importance of India, it is just fair that it is there. It adds to an extra point of view because G7 are mostly the industrialised countries, we have a big country like India from the south, it adds to a totally different aspect.

A lot of focus will be on the Ukraine crisis. If you are in Europe, this is dominating the talk. PMs know it, it has been the case in many meetings. This will be dominating, also the post covid situation how do we deal with pandemics, how do we make things better in the future and how do we deal with renewable energy, green economy issue because after we have the restart of the economies. Then we have terrorism and global developments.

WION: Do you think India should become a permanent member of the G7 in the near future?

Walter J. Lindner: I think first, India should be a permanent member of the Security Council because that is where it belongs. G7 is a particular group of countries which are developed and high developing countries, so I think this is not a question.

The important thing is at the security council it should be a permanent member and should be invited all the time to the G7 and then it will be the president of the G20 next year. This is very important because whatever is discussed at the G7 has an impact on the G20 so if the two presidents, Germany now and India next are in sync then next year I think it will be very helpful for the international development.

Walter J. Lindner: Every country has a different history, different positions, and dependencies. We in Europe had a very strong and big dependency on Russian energy, (which) we still have. So, what we are doing, is to try to reduce, reduce, reduce and by end of August, we will have zero imports of Russian oil.

Coal is gone right now and then by end of next year, we will have zero imports of Russian gas. So, we do a lot there, but India has much less import from Russia, and I think we should not finger point India, but rather emphasise that we have reduced to zero our European dependency on Russian energy and then other nations in the world will do the same.

WION: You are an Indophile, you love India can you tell me about how it all started...

Walter J. Lindner: It started 45 years ago during the hippie time when we in Europe considered India as a country where you have spiritual attraction and where you have people totally dedicated to life values and while in the west, we were more into making money and economy progress. This was the philosophy 40 years ago.

We had authors Hermann Hesse, his book Siddhartha and then solidarity concerts which led us European, or western youth to find India as the travel destination. So, I have worked as a taxi driver, truck driver, and at Mcdonald's just to get money to travel to India.

40 years ago, I visited India and experienced it for myself. Now I am leaving as an ambassador, but this travel is by no means over, so it will be a destination for me for the next 20 years and I will come back.

WION: And what happens to Amby, the famous red ambassador car you travelled around in Delhi...and your non-diplomatic way of reaching out?

Walter J. Lindner: Amby, as much as I love her, she belongs to India. I would not bring her to the snow of Germany or ice roads. It will remain here but as for what will be her fate in future, I will talk to her and see if my successor gets along well with her. If he does and agrees, he might accompany her. Her will and wish. We must ask if she wants to retire in a cool place here but I think we need to respect her will.

WION: How do you think global geopolitics will change because of the Russian invasion of Ukraine?

Walter J. Lindner: Back in the 90s when the wall came down, there was a period of 10-20 years...we have now reached a status where things are going better. We have the global development goals, the end of history, no more cold war, Gorbachev, Bill Clinton...we thought things were moving in the right direction. They were there for a while, but nobody expected Putin to initiate this incredible brutal war. Now the consequence of this is not good, the peace we had in the early years of the 2000s--we were investing money into development, cultural projects, and rather not into the military.

Consequently, now many nations will spend much more money on the military, and this money is needed for other things which we must finance; (like) climate change, and development. So, this kind of militarisation of international politics is not a good development.

WION: And you think China can follow in Russia's steps?

Walter J. Lindner: Well, I don't want to mention a particular country but what is important to tell Putin is that this is not your success story for you. You made a big mistake. Other nations, I don't want to name them, think twice-- if they think in future, that well, we (will) follow a model like Putin, invade an innocent nation and get away with it. If we show Putin, you can't do this, we show it to countries which might think they can (also) do this.