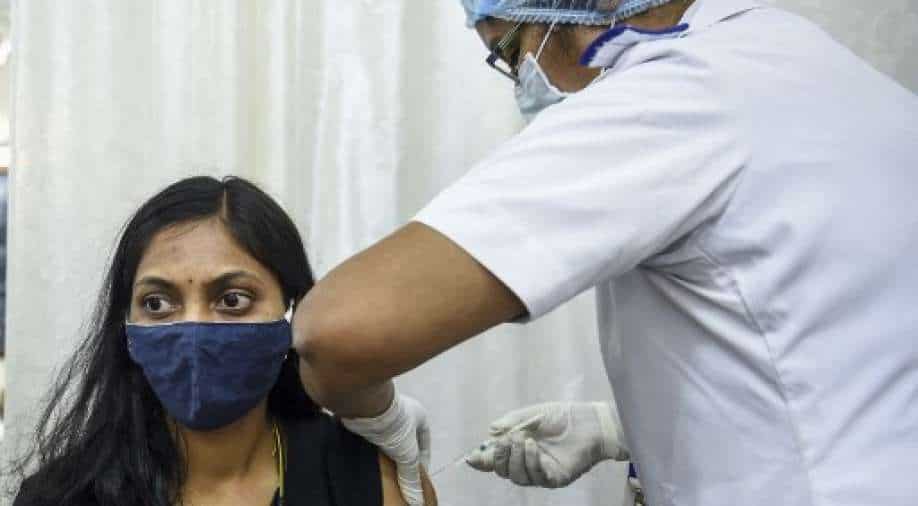 A medical staff inoculates a colleague with coronavirus vaccine in Mumbai Photograph:( AFP )

The Cambridge India tracker had correctly called the peak of this devastating second wave in May and also forecast in August that India would see a slow burn in its Covid infections curve until the vaccination coverage was sufficiently high.

Researchers at Cambridge University in the United Kingdom have warned of a "explosive" increase in Omicron cases in India in the coming days, saying it's "impossible to forecast how high daily instances" could go.

India recorded around four lakh new cases per day during the height of the second wave.

According to a team of researchers who developed the India COVID tracker, infection rates are rising rapidly across India.

Six states were singled out as "major concerns" by the tracker. According to a report dated Dec. 24, the adjusted growth rate of new cases has surpassed 5%.

According to the tracker, which accounts for "weekday effects," this had spread to 11 Indian states by December 26 "along with other variations."

Covid cases increased by 13,154 in India.Thursday saw the largest number of new daily cases in three weeks, bringing the total number of confirmed illnesses to 34.8 million.

To date, 480,592 people have died as a result of the disaster. Even though just 961 cases of the highly modified omicron have been detected so far, the country is already preparing to prevent another big outbreak.

It permitted booster doses last week and expanded the vaccination programme to cover teens aged 15 to 18.

On Tuesday, the Indian capital of New Delhi banned cinemas, schools, and gyms, as well as restricted public gatherings, a day after the city reported the highest number of new cases in more than four months.

The Cambridge India tracker correctly predicted the peak of this devastating second wave in May, as well as a slow burn in India's COVID infection curve until vaccination coverage was high enough in August.