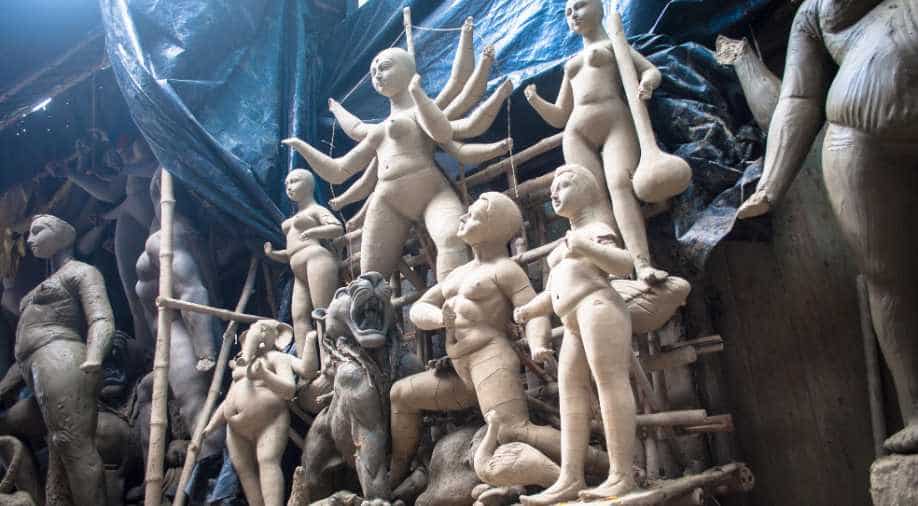 As Madame Tussaud is for wax modelling, Kumartuli is for clay modelling. As Durga Puja came to be celebrated as 'sarbojanin' neighbourhood festival in Bengal, Kumartoli emerged as the most significant center of making clay models of Hindu deities. Situated in North Kolkata, Kumartoli, for decades, has been extremely dominated by men. The interference of women was strictly avoided. Possibly, such a prohibition could be derivative of Hindu Shastraic injunction against women reading religious texts. For long Hindu religion worshipped women but kept them at bay from playing a decisive role in the performance of religious rites.
Fortunately, times are changing. Slowly but definitely. Clay modelling is a profession in which men are the leading actors but women of Kumartuli are also showing off their brilliance.

Few women in Kumartuli are setting the example for others. China Pal, Mala Pal, Kanchi Pal and Kakoli Pal. They are not only breaking the stereotypes but also doing a good business in Kumartuli among male artisans.

Mala Pal has been single-handedly taking care of her family studio for the last 3 decades. Mala's brother gave up and did not join the family business. At the age of 15, she had to quit school and started making Durga idols. Despite all hardships and financial problems, Mala emerged as the unvanquished fighter. She has won several state award for her work. Especially, her miniature foldable idols are very famous, and even get exported to UK, Germany and Canada. She is also training young girls to join the profession.

China Pal was trained by her father Hemant Pal. Her father died in 1994 since then, it is China who has taken sole responsibility of her father's studio. She said, “After father's death, his regular customer came to me and that was very motivating”. She is now a very famous artisan in Kumartuli. She also mentioned that this business requires a lot of investment at the initial stage. In 2015, she made an androgynous sculpture for a transgender community named Pratyay Gender Trust.

For the first time in the history of the public celebration of Durga Puja, “Ardhanarishvara” idol was worshipped that was crafted by China.

Androgynous sculpture of goddess Durga (Others)

An artist without a studio

Archana Pal took care of the studio when her husband Nrisimha Pal died. She then trained her daughter Kanchi Pal, and now Kanchi is standing neck to neck with other male artisans. She is giving definitely a stiff competition to others. Kanchi advocates the participation of a larger number of women idol-maker in the Kumartoli workforce.

Narrow and congested lanes of Kumartuli is a workplace for another women clay modeller Kakoli Pal. Kakoli doesn't have a studio. “I have appealed to local authorities to provide me with a studio on rent”, she said. She went through a lot of difficult time when her husband died and left her alone with two other children. She doesn't have any training in idol-making. She was just married off to a male artisan of Kumartuli. Pushed by misfortune, Kakoli just took a plunge in the profession of idol-making for her survival as well as that of her two daughters. And she pulled it off.

Kakoli also said, “I cannot go to remote places to fetch material that is required for idol-making because of safety issues.”

Mala, China, Kakoli and Kanchi, these women are making it really big in the eccentric and male-dominated profession and walking a path-less-taken and, thus, slowly removing the gender gap that exists in the craft and business of clay modelling.