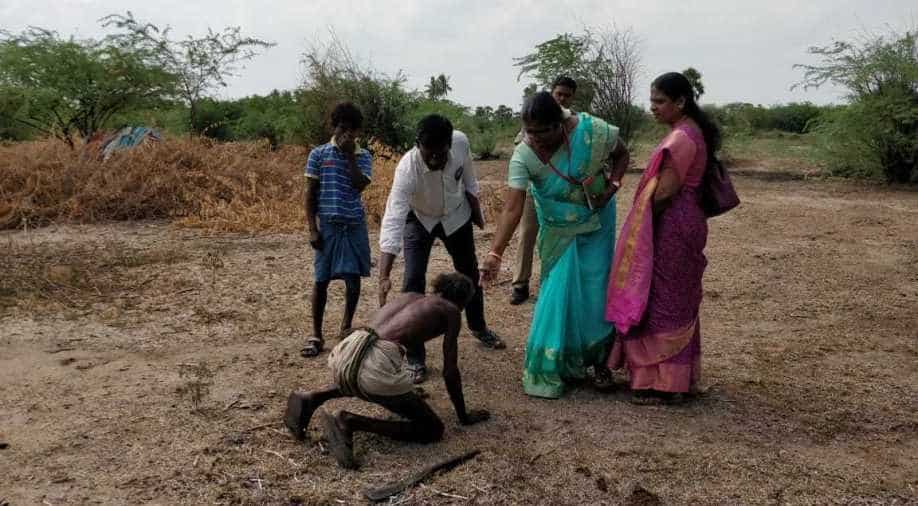 The families were subjected to bonded labour for allegedly two to 15 years after they borrowed amounts in cash ranging from Rs 9,000 to Rs 25,000 rupees.

Twenty-eight people including nineteen children from eight families were rescued from Kancheepuram after the bonded labourers association informed the district authorities.

Among the pictures and videos that were in circulation from rescue, the most moving was that of a frail-looking senior citizen falling on the feet of the officials, ostensibly for having rescued the labourers and their families.

The families were subjected to bonded labour for allegedly two to 15 years after they borrowed amounts in cash ranging from Rs 9,000 to Rs 25,000 rupees.

The families accused the owner of starving them and their children and fell on the authorities legs to save them.

In one the videos, a rescued woman recounted the inhuman treatment meted out and saying to the officials, "The torture was such that they didn't even provide us food before going for work in the morning. We had to often appease our hunger by drinking water. Our kids aspired to study in schools but they were not allowed to.. the person who is responsible for this inhuman treatment meted out to us is Nataraj. He has his meals on time and takes rest, while we toil hard without food. Few others who were bonded labourers here ran away unable to tolerate the ill-treatment. He barely pays us Rs 100 or 200."

In another video, a lady official is seen questioning the alleged perpetrator of the crime. On being questioned by the district officials the man who held the labourers captive said: "I am taking care of them, they have been working here only for a week or so."

When asked about whose land it is, he declared the "the land belongs to a person in Chennai and we have been asked to take care and cut the wood, the wood is later sold to rice mills and other factories".

All have been rescued and an investigation has been initiated against the owner.