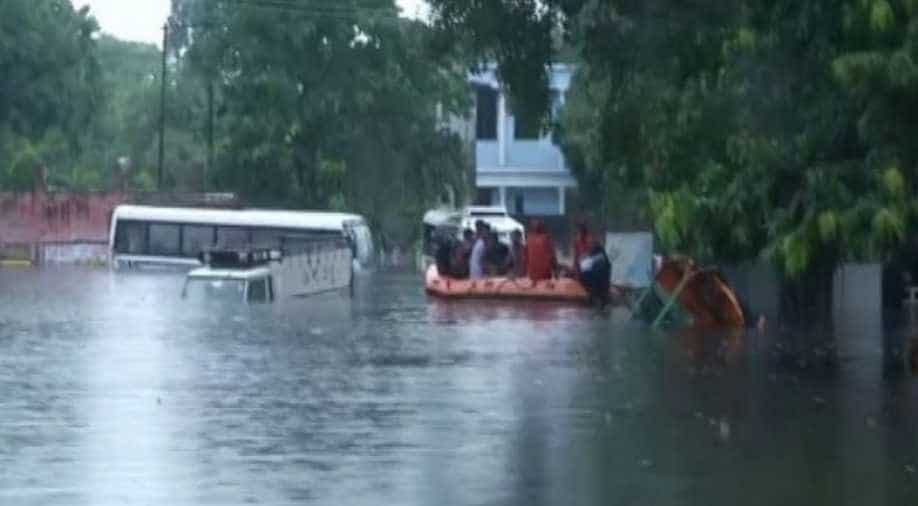 The heavy downpour has caused flash flooding in the region. Photograph:(ANI)
Follow Us

The Indian Air Force helicopters are dropping relief material to the flood-affected areas of the state.

Amid the worsening conditions in Bihar due to floods triggered by rains in which the death toll has climbed to 40 so far, Union Minister Ravi Shankar Prasad on Tuesday said that four big pumps were being brought to Bihar to remove floodwater and accelerate relief work.

"I have cancelled my plans back at Delhi and will stay here for few more days. To speed up the relief work, I have asked for four big pumps that will reach here till afternoon. The pumps are of 2-3 tonnes and are very efficient," Prasad said while speaking to media here.

Today the union minister reiterated that the Centre will provide all support to the Bihar government to provide relief to people in Patna and other parts of the state, which has been battered by heavy rain and flooding.

On Monday, Prasad had said he had asked for additional pumps from Coal India to pump out water. "I was told to pump out water it is better that Coal India sends its big pumps. Regarding this, I spoke to Union Coal Minister Prahlad Joshi and a big pump is coming from coal fields in Chhattisgarh," he had said.

According to the Bihar State Disaster Management Authority, until now, 40 people have died in the state due to floods.

The Indian Air Force helicopters are dropping relief material to the flood-affected areas of the state. Five teams of National Disaster Response Force (NDRF) have been deployed in Rajendra Nagar and Kankarbagh areas of Patna to assist people facing difficulties

About the total number of people rescued, Sinha said that around 7000 people were rescued till yesterday by the NDRF. "The data for today can be determined by the night," he said.

"We are facing a lot of difficulties to find clean drinking water. NDRF is helping but we want more help from the government side," a local told ANI.

Where many people are dependent on NDRF for flood relief material, people at the Sri Krishna Memorial Hall in Patna have gathered in special groups to collect and pack relief material for the flood-affected people.

"We are packing food material like chuda, milk, sattu for the people who are stuck inside their houses. Bihar is flooded and we have to help each other. Around 300 workers are here helping us to pack the food material," Shashi Sneh, a worker told ANI.

Dewatering machines have also been sought by state to provide relief in the flood-affected areas.

Chief Minister Nitish Kumar on Sunday afternoon visited the severely flooded areas of the state capital and issued necessary instructions to the officials for resolving the issue.