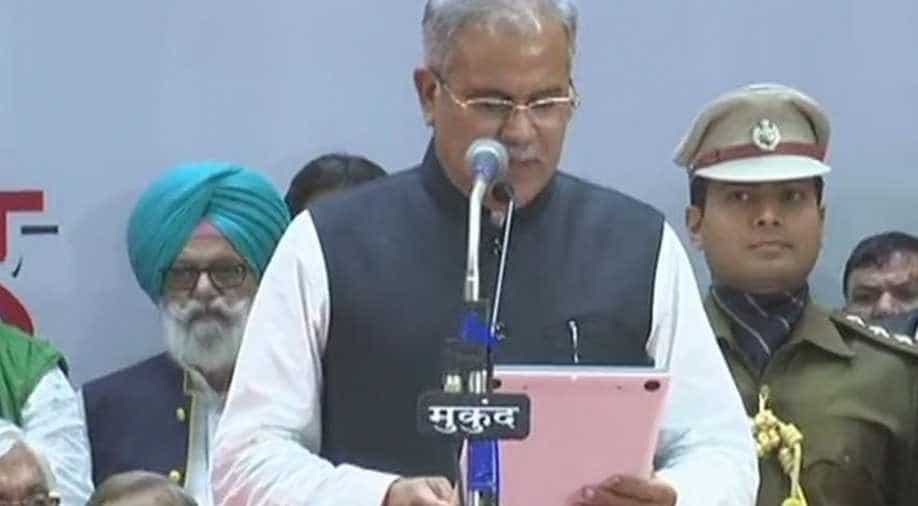 Shortly after the ceremony, Baghel said that the decision to waive farm loans has been taken.

"Chhattisgarh CM Bhupesh Baghel: Congress President Rahul Gandhi had announced that farm loans will be waived within 10 days and that Minimum Support Price (MSP) for maize will be increased to Rs 2500 from Rs 1700 per quintal. These two decisions have been taken today," Baghel told media.

Raipur: Bhupesh Baghel takes oath as the next Chief Minister of #Chhattisgarh pic.twitter.com/YMOnKaOf92

Baghel is a Kurmi leader who represents Patan Assembly constituency in Durg district. He has been the president of Chhattisgarh Congress since 2014.

Earlier in the day, the venue of Baghel's oath-taking ceremony was changed due to rainfall. The venue has been changed from Science College ground to Balbir Singh Juneja Indoor Stadium in Raipur, news agency ANI reported.

Chhattisgarh CM: Our third decision is related to Jhiram Ghati. Total 29 people including prominent leaders like Nand Kumar Patel were killed. Conspirators haven't been exposed. No such massacre of politicians ever took place in history. To nab the culprits, a SIT has been formed pic.twitter.com/Qj4wCCyJUP

Apart from Baghel, TS Singh Deo, Tamradhwaj Sahu and Charan Das Mahant were the top contenders for the post.

After mulling over various options for the past four days, Rahul Gandhi led Congress decided on Baghel, said sources.

Meanwhile, earlier in the day, senior Congress leaders Kamal Nath and Ashok Gehlot were sworn in as the chief ministers of Madhya Pradesh and Rajasthan respectively.