Kamal Nath sworn in as Madhya Pradesh CM, first act is to sign off on farm loan waiver 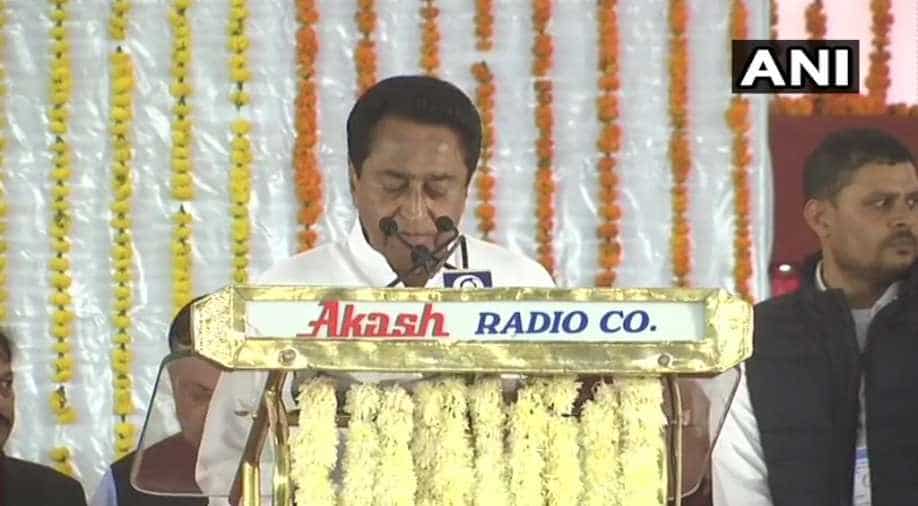 Nath, who has held several portfolios in the Union cabinet, was appointed the Madhya Pradesh Congress Committee president on April 26 and was at the forefront in steering the party to a win in the November 28 Assembly polls.

Congress leader Kamal Nath was sworn in as the 18th chief minister of Madhya Pradesh on Monday.Governor Anandiben Patel administered the oath of office to Nath.

The governor had on Friday invited Nath to form the new government in the state.

Madhya Pradesh CM Kamal Nath: Our schemes of providing incentives of investment will only be imposed after 70% people from Madhya Pradesh get employment. People from other states like Bihar, Uttar Pradesh come here & local people don't get jobs. I have signed file for this pic.twitter.com/qjORqyBuFc

Nath's first act as chief minister was to sign off on the farm loan waiver promised by the Congress.

Nath, who has held several portfolios in the Union cabinet, was appointed the Madhya Pradesh Congress Committee president on April 26 and was at the forefront in steering the party to a win in the November 28 Assembly polls.

Madhya Pradesh CM Kamal Nath: After joining this post (of Chief Minister), the first file I have signed is of farm loan waiver of Rs 2 lakh each, as I had promised to the farmers pic.twitter.com/E7Goc2T425

Meanwhile, the venue of CM designate Bhupesh Baghel's oath-taking ceremony was changed due to rainfall today.

Due to rainfall, the venue was changed from Science College ground to Balbir Singh Juneja Indoor Stadium in Raipur, news agency ANI reported.

Baghel was sworn in as Chhattisgarh CM on Monday evening.

Apart from Baghel, TS Singh Deo, Tamradhwaj Sahu and Charan Das Mahant were the top contenders for the post.

After mulling over various options for the past four days, Rahul Gandhi led Congress decided on Baghel, said sources.

Senior Congress leader Ashok Gehlot was sworn in as Rajasthan Chief Minister earlier in the day.