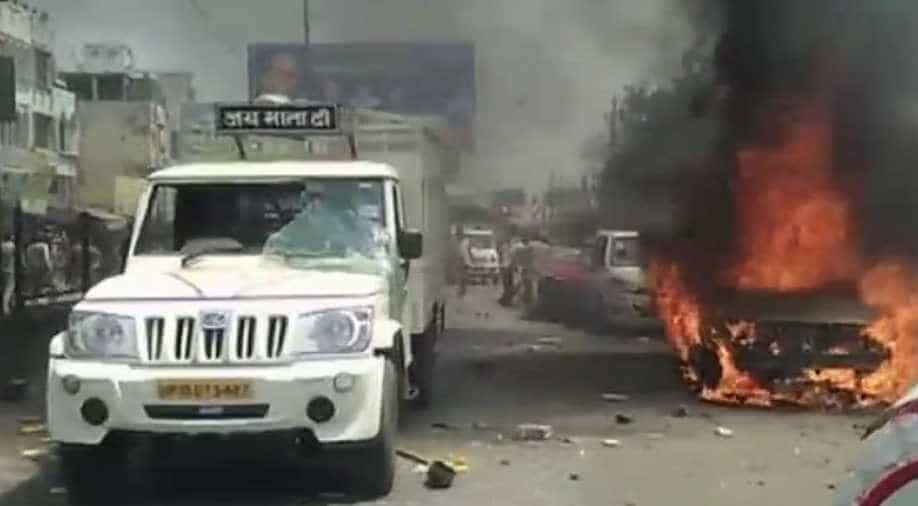 India erupted in violence Monday as Dalit protesters went on the rampage against an alleged dilution of the Scheduled Caste and Scheduled Tribe (Prevention of Atrocities) Act.

At least nine people were killed in North India, as the protesters blocked trains, clashed with police and set fire to vehicles across several states during a nationwide bandh.

Six people were killed in Madhya Pradesh, at least five of them in the crossfire between the police and protesters. Three other people died, two in Uttar Pradesh and one in Alwar, Rajasthan.

The Army and paramilitary forces were also put on standby in Punjab.

The Union Home Ministry, which rushed 800 anti-riot policemen to MP and UP, asked all states to take preventive steps and maintain public order to ensure safety of lives and property.

Transport, mobile and internet services were hit in many states with over 100 trains getting affected due to protests.

The protests follow a March 20 Supreme Court order banning the automatic arrest and filing of cases against people accused under the act. The court had wanted to protect "honest" public servants discharging bona fide duties from being blackmailed with false cases under the Act but the Dalits believe the order may lead to an increase in violence against the community (which already faces massive discrimination at the hands of upper caste and OBC Hindus.

While some states had ordered closure of educational institutions as a precautionary measure, incidents of arson, firing and vandalism were reported from MP, UP, Rajasthan, Bihar and Punjab, among other places.

In UP, nearly 75 persons including 40 policemen were injured in violent protests in various parts of the state. Police have detained nearly 450 people there.

In Rajasthan, 26 people including nine policemen were injured in Alwar.

Home Minister Rajnath Singh appealed for peace, while Law Minister Ravi Shankar Prasad said the government was not a party to the Supreme Court decision on the SC/ST Act and "respectfully" did not agree with its reasoning behind the verdict.

The Government of India has advised all states to maintain law and order and we are ready to provide assistance to any state that may require so.

Prasad also said the government has filed a very comprehensive review petition in the matter.

Senior Congress leader Ghulam Nabi Azad alleged that incidents of atrocities on Dalits and minorities have increased in the country since the NDA came to power in 2014, while AAP leader and Delhi Chief Minister Arvind Kejriwal extended his support to the protesting groups.

UP Chief Minister Yogi Adityanath appealed for peace and urged the people not to vitiate law and order, as violence was reported from many districts including Azamgarh where protesters torched two state-run buses, injuring several passengers.
As protests turned violent in Agra, Hapur, Meerut in western UP, Director General of Police (DGP), O P Singh, said, "We have sought more force from the Centre that will be deployed there."

Many trains, including premier Rajdhani and Shatabdi expresses, were stopped by protestors while some were short-terminated.

A group of about 2,000 people disrupted trains at the Hapur station as well, disrupting the movement of many goods trains, railway officials added.

The CBSE has already postponed Class 12 and Class 10 examinations scheduled to be held today in Punjab at the request of the state government in view of the 'Bharat Bandh'.

In the national capital region, protesters squatted on tracks at several places, stopping trains, including the Dehradun Express and the Ranchi Rajdhani, while a Northern Railway official said services were also disrupted by a mob in Ghaziabad.

In Patna, protesters stormed the railway station, forced closure of ticket counters and squatted on tracks disrupting movement of a number of trains.

Normal life was also affected in several parts of Odisha where activists of different Dalit groups put up road blockades.

Major towns and cities of Gujarat also witnessed protests while civic-run transport services were halted after some of the buses were targeted by agitators.