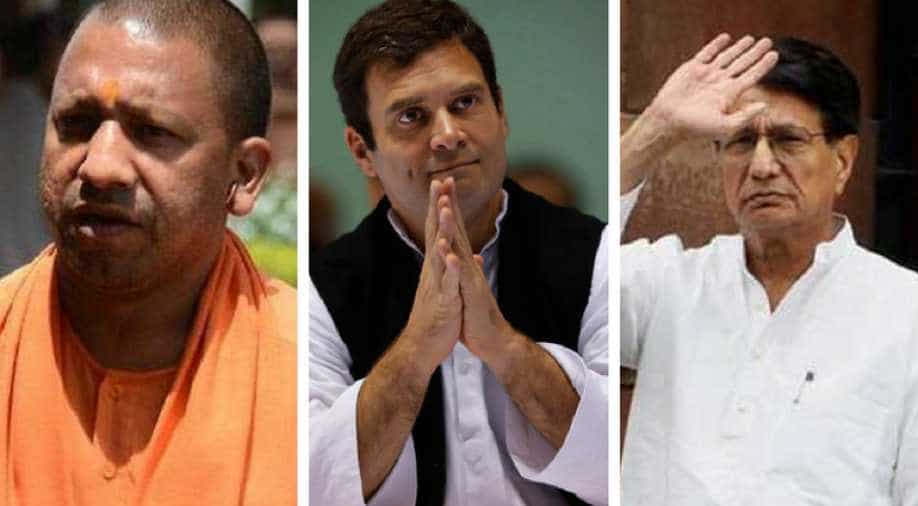 Dealing a body blow to the ruling BJP, opposition parties on Thursday emerged victorious in 9 out of 10 Assembly seats even as the BJP asserted that the PM -- which it described as 'P' for performance and  'M' for Mehnat (hard work) -- would decide the Lok Sabha polls next year.

Figures for the 10 assembly bypolls came as a big setback for the ruling party which could win just one (in Uttarakhand). The Congress bagged three (in Meghalaya, Karnataka and Punjab) and others got six -- JMM two in Jharkhand CPI (M), SP, RJD and Trinamool one each in Kerala, UP, Bihar and West Bengal, respectively.

The Congress also won one assembly seat in Maharashtra without contest after all other parties withdrew their candidates.

The party, which retained RR Nagar assembly in Karnataka and another in Meghalaya, termed the bypoll results as the people's mandate against four years of the Modi rule and the beginning of the end of the BJP empire.

"The writing on the wall is clear. The BJP's exit and success of the Congress and its allies are guaranteed," Congress leader Pramod Tiwari told reporters.

The BJP and its allies failed to retain Noorpur in UP and Shahkot in Punjab, while Congress, CPI (M), Jharkhand Mukti Morcha and Trinamool retained their respective seats.

The BJP retained Tharali in Uttarakhand, but lost Noorpur in UP. SP's Naeemul Hasan trounced BJP's Avni Singh in Noorpur.

A buoyed Tejashwi Yadav of RJD said Chief Minister Nitish Kumar, who dumped the RJD and Congress last year to join hands with the BJP to form a new coalition government in the state, should resign if he has some conscience left.

Congress president Rahul Gandhi congratulating all the winners said valuable lessions to be learnt from the victories and defeats for all the parties.

Congratulations to all the winners in the by polls, across India. Valuable lessons to be learnt from the victories & defeats for all parties. I want to thank all the workers & leaders of the Congress party for their hard work & dedication in these elections. God bless you all.

Senior BJP leader and Union Home Minister Rajnath Singh said one has to take two steps backward before a big leap and the BJP is "going to take a massive leap."

BJP's Subramanian Swamy, however, had a word of caution for the party and said the "this huge setback in by polls is due to Hubris".

"But the trend is easily reversible if party stops rewarding sycophancy and has more participatory decision-making ethos amongst those leaders whom the public find credible. BJP has the infrastructure to bounce back but needs a new ethos," he said.

Former Chief Minister Akhilesh Yadav called the results "a defeat of divisive politics" and congratulated all opposition parties for the results.

RLD's Jayant Chaudhary said the opposition unity will continue and the results showed that "Jinnah hara, Ganna jeeta" -- referring to the recent controversy over the Pakistan founder's portrait and the problems being faced by sugarcane farmers.

CPI (M) leader Sitaram Yechuri said BJP's loss at its "laboratory of communal and hate politics", Kairana, clearly showed that people did not accept the ruling party's politics but warned that the loss could push the RSS-BJP to spread communal tensions to consolidate the "Hindutva vote bank".