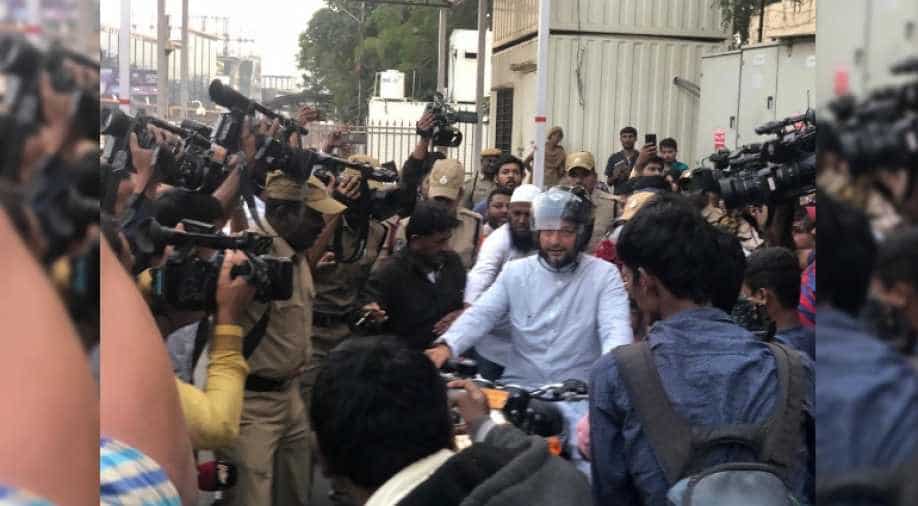 As always, the All India Majlis-e-Ittehadul Muslameen president or "sadr" Asaduddin Owaisi is in the news and much in demand with only a few hours to go before the counting of votes in Telangana. Though Owaisi has been extending unflinching support to the Telangana Rashtra Samithi, he's also being courted by the Indian National Congress just in case the "Mahakutami" (Grand Alliance) falls short of the numbers.

Since Monday morning, the buzz on the grapevine had been that caretaker chief minister K Chandrashekar Rao had invited Owaisi or "Sadr Saab" as he is called for lunch.

At around noon, Owaisi tweeted, "I'll be meeting Telangana's caretaker & next CM of Telangana, KCR Sahab @ Telangana CMO at 1.30 pm today. Inshallah he'll form government on his own strength, and Majlis will stand by him. This is our first step towards a larger goal of nation building.....''

Known for his punctuality, the local and national media lay in wait for Owaisi near Pragathi Bhavan, KCR's home-cum-office. All cameras were up and ready, on the lookout for Owaisi's SUV.

However, at around 1.40 pm, a two-wheeler zoomed past Pragathi Bhavan's gates and for a few seconds, none of the journalists gathered there were able to tell that it was Owaisi himself on his two-wheeler — a Triumph 925 cc.

No one had imagined that Owaisi would turn up on his motorcycle.

After three hours, at around 4.45 pm, Asaduddin rode out of Pragathi Bhavan.

This time he could not escape the assembled media. He got down from his motorcycle and spoke to them.

He was of course asked about his entry and exit on his Triumph, to which Asad answered in inimitable Hyderabad style... "Hyderabad ka mausam achcha hai... hamari gaadi (his motorcycle ) aur car (the TRS' symbol is a car) aage bhi speed se saath jaayenge."

After which he zoomed off on his motorcycle.

The results of the Telangana elections, along with those of Madhya Pradesh, Rajasthan, Chhattisgarh, and Mizoram, will be declared tomorrow.