As India preps to address another UNGA session, we remember Sushma Swaraj's contributions 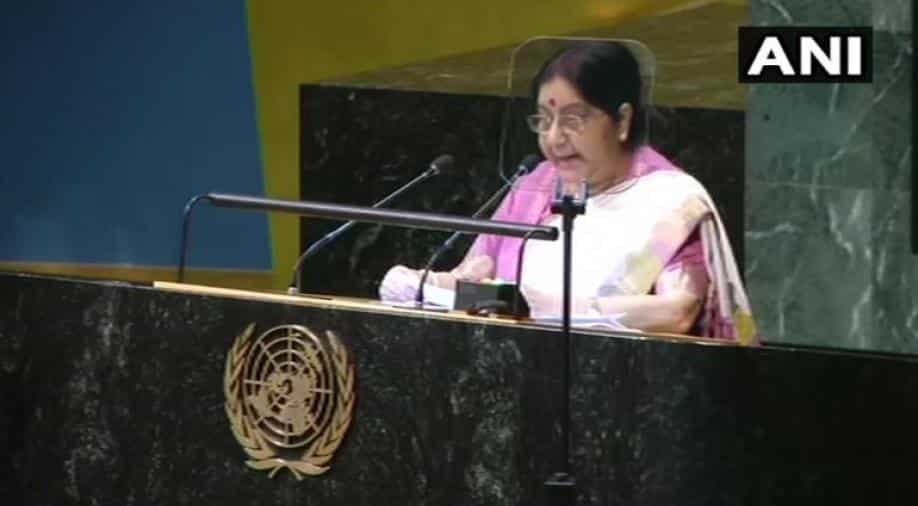 Amongst other things, the stalwart never shied from shedding light on Pakistan and its 'export of terrorism' on international platforms.

It is often said that the presence of people can be felt long after they've left for higher places. Nothing stands truer, as the next UN General Assembly session fast approaches, without the presence of one of India's most beloved leaders, Sushma Swaraj.

The people's External Affairs Minister, Swaraj breathed her last in New Delhi on August 6. India's foreign policy under the Swaraj-Modi leadership put the country on the international map as a force which shapes global agenda.

Amongst other things, the stalwart never shied from shedding light on Pakistan and its "export of terrorism" on international platforms.

During her statement at the General Debate of the 72nd Session of the UNGA in 2017, she had famously highlighted how despite "being the principal destination of Pakistan's nefarious export of terrorism," India had produced scholars, engineers, and doctors while Islamabad had produced terrorists and terrorist camps.

"Pakistan's Prime Minister Shahid Khakan Abbasi accused India of state-sponsored terrorism and of violating human rights. Those listening had only one observation, 'Look who's talking!' A country that has been the world's greatest exporter of havoc, death and inhumanity became a champion of hypocrisy by preaching about humanity from this podium," she had said.

Tearing into Pakistan, Swaraj further said that while India had created and established institutions like IITs, IIMs, and AIIMS which got pride to the country, Islamabad had created terror groups like Lashkar-e-Taiba, Jaish-e-Mohammed, Haqqani network, to name a few.

Just last year, she tore into Pakistan again. New Delhi had also called off a meeting with Islamabad on the sidelines of the UNGA after three jawans were brutally killed by 'Pakistan-based entities' and Islamabad had released a series of postage stamps glorifying a terrorist and terrorism.

"On December 9, 2016, I personally went to Islamabad and offered a comprehensive bilateral dialogue. But soon after, Pak-sponsored terrorists attacked our air force base in Pathankot on 2nd January. Please explain to me how we could pursue talks in the midst of terrorist bloodshed?" Swaraj had questioned during her speech at the UNGA last year.

"Even now, after the new government came to power, the Prime Minister of Pakistan Imran Khan wrote to Prime Minister Modi suggesting a meeting between Foreign Ministers in New York. We accepted the proposal. But, within hours of our acceptance, news came that terrorists had killed three of our jawans. Does this indicate a desire for dialogue?" the late EAM had added during her speech.

Making India's stand against terrorism crystal clear, Swaraj told Pakistan that talks and terror could not go together. It has been India's long-standing condition that Islamabad needs to dismantle all terror infrastructure on its soil and stop providing support to terror outfits for the resumption of bilateral talks.

Even though the international community was made aware of Pakistan's hand-in-glove nature with terrorism through Swaraj's initiatives, the world was provided with cold, hard proof after the February 14 Pulwama terror attacks, which claimed the lives of 40 CRPF personnel.

A terrorist belonging to Pakistan-based terror outfit Jaish-e-Mohammed (JeM) had rammed his bomb-laden vehicle into a passing CRPF convoy in Jammu and Kashmir's Pulwama, leading to the devastating loss of Indian personnel.

Refusing to be cornered because of Islamabad's patronage to terrorism, New Delhi launched extensive diplomatic efforts globally to get the Pakistan-based JeM chief Masood Azhar listed as a global terrorist at the United Nations Security Council which became a reality on May 1, handing New Delhi one of its biggest diplomatic victories.

Soon after India abrogated Article 370 which accorded special status to Jammu and Kashmir, Swaraj tweeted, "@narendramodiji - Thank you Prime Minister. Thank you very much. I was waiting to see this day in my lifetime," before she was rushed to AIIMS in New Delhi, where she later breathed her last.

As Pakistan looks to rake up the Kashmir issue at the upcoming UNGA, India has vowed not to use the United Nations as a platform for "dramatic purposes."

"India is a serious actor. Its voice is heard with seriousness. What we do, when we do, we will do the way we want it. It's not for broadcast purposes you will appreciate. We are a player of consequence in the world, not dramatist personae who just is a fleeting presence on the world stage," India's Permanent Representative to the United Nations, Syed Akbaruddin told ANI, while taking a veiled jibe at Pakistan.

Even as India preps to address another UNGA session, it is difficult to forget the role Swaraj took on to bring terrorism and climate change to the forefront of the global agenda.

There's no better partnership that comes to mind when deliberating on why India's voice is heard louder today on global platforms than of Swaraj and Modi's.

This is why it becomes important to remember the leader as we go forth on our path of becoming the superpower we`re projected to be.