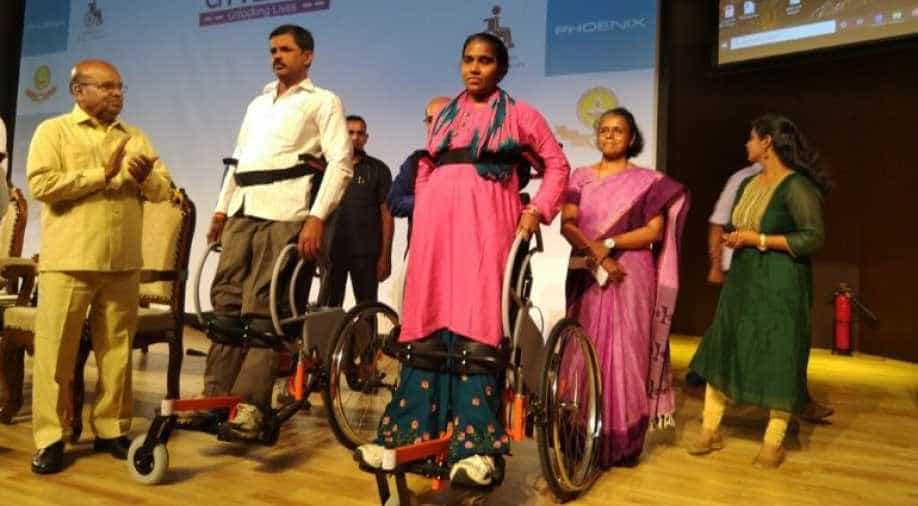 The standing wheelchair called ‘Arise’ was designed and developed by the TTK Center for Rehabilitation Research and Device Development at IIT-M.

Those that require a wheelchair also face challenges such as lack of awareness, high costs and even low availability of quality products. But the hardships don’t end there, as being seated on a wheelchair for long hours also causes secondary health issues such as poor blood circulation, spasms and pressure sores.

A collaborative effort between IIT Madras and their industry partners aims to help the differently-abled in overcoming most of these challenges. The IIT Madras, in collaboration with Phoenix Medical Systems has launched what they call India’s first indigenously-designed ‘Standing Wheelchair.’ It enables a differently-abled person requiring a wheelchair to shift from sitting to standing position, and vice versa, independently and in a controlled manner.

The standing wheelchair called ‘Arise’ was designed and developed by the TTK Center for Rehabilitation Research and Device Development (R2D2) at IIT-M, headed by Prof Sujatha Srinivasan in the Department of Mechanical Engineering.

The project initially began as a student project and later its commercialisation was made possible through support from Wellcome, UK, through an ‘Affordable Healthcare in India Award', which brought together the research and manufacturing partners. A 16-member team had been working on developing various prototypes over the last four years.

The three-wheeled chair that costs Rs 15,000 comes is four different sizes depending on the body type and can be customised based on posture, while also being mass manufactured. Arise was designed in such a way that the user can actuate it from the sitting position to the standing position and vice versa using the power of the user’s arms. Besides knee pads, front and back support, adjustable footrests, Arise has an interlocking mechanism, which ensures that the wheelchair remains in a locked state if the knee block is not in position.

Speaking at the launch event, Shri Thaawarchand Gehlot, Minister for Social Justice and Empowerment said, “I have seen a lot of scientific developments in India and abroad over the last 5-6 years, but I haven’t seen such a good standing wheelchair in any country. When such wheelchairs are made in India, why is there a need to import?”

Speaking to WION Dr Sujatha Srinivasan, head of the R2D2 lab said, “The wheelchair has been designed and built in such a way that that effort required for the user to stand using it is equal to or less than that of moving the wheelchair, as we have used a linkage with spring balancing system. We have extensively tested it with over 50 users form various institutions such as Christian Medical College Vellore, Mobility India and St Johns Hospitals”.

Statistics quoted by the WHO say that only one in ten physically challenged people have access to assistive technology, but when they are provided the necessary aid, it could improve their access to education, employment and social participation.

“Currently we have the capability of manufacturing 300-400 wheelchairs per month and our vision is to scale this up to 10,000 per month. We plan to distribute it via dealers who specialise in assistive technology and prosthesis. Our model costs Rs 15,000 while imported standing wheelchairs are priced at over a lakh and beyond. Since most of the parts used by us are bicycle parts, it would be easy to get them replaced when the need arises”, Sashi Kumar, MD of Phoenix medical Systems told WION.

At the event, a few wheelchairs were donated to differently-abled persons who had spinal injuries. The users were delighted on being able to rise up independently for the first time, while the National Anthem was being played.