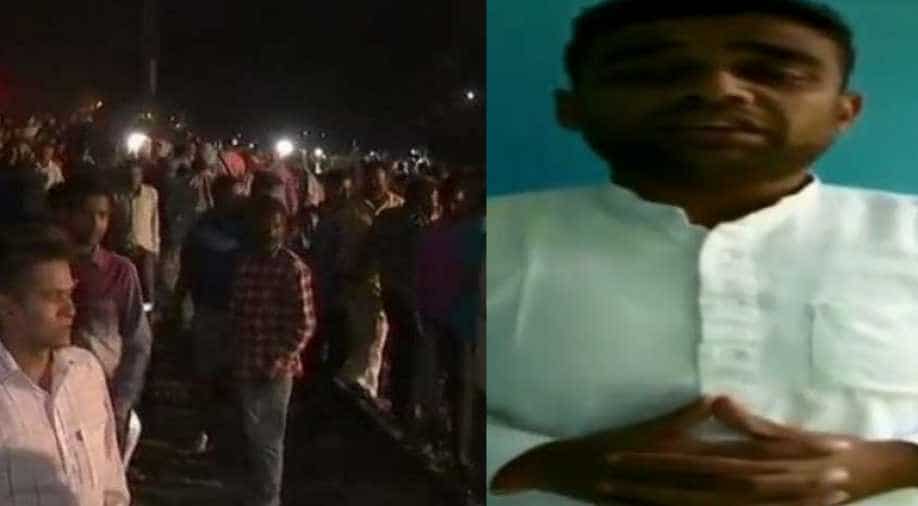 Combination picture made from a screen grab from the video and file photo of the accident. Photograph:( ANI )

Two days after the report of Sourabh Madan Mithu, one of the key organisers of the Dussera event in Amritsar, went untraceable; a video message has now been released in which he has claimed that he had taken "all permission". He also said that he and his family are extremely pained by the accident.

The 1 minute 38 seconds long video, posted by ANI, opens with Sourabh Madan saying that "he cannot express in what condition he is in" adding that the event was "organised to unite people."

Organizer of Dusshera event Saurabh Madan Mithoo releases video message,says ' Had taken all permissions,had alerted crowd atleast 10 times to not stand on tracks. I am extremely pained by the incident. Some ppl are trying to defame me' #Amritsartrainaccident (location: unknown) pic.twitter.com/viPXBws3P8

He then continues saying that the event was organised in the Dussehra ground and not on tracks, "we had all permissions...had spoken to police, (municipal) corporation, fire brigade.  He also says that "people were standing on the tracks and they were also alerted at least 10 times to not stand on tracks."

"People were standing on the tracks and the train came out of nowhere. It was an act of God, what is my fault in this," he added.

Sourabh Madan then alleged that some people have "a personal vendetta against me."

At least 59 people died and 57 were injured in Amritsar after a train ran over the crowd, standing along train tracks, to watch an effigy of Ravan being burnt.

The accident took place on Friday in Choura Bazar near Jodha Phatak area of Amritsar.

It was reported on Saturday that, municipal corporation councillor Vijay Madan and his son Sourabh Madan Mithu, the main organisers of the Dussehra celebration in Amritsar have gone underground with his family members.

According to police, a few people angry over the accident had attacked their residence, broke window panes and pelted stones.

At least 300 people reportedly were watching the 'Ravana dahan ' at a ground adjacent to the tracks.