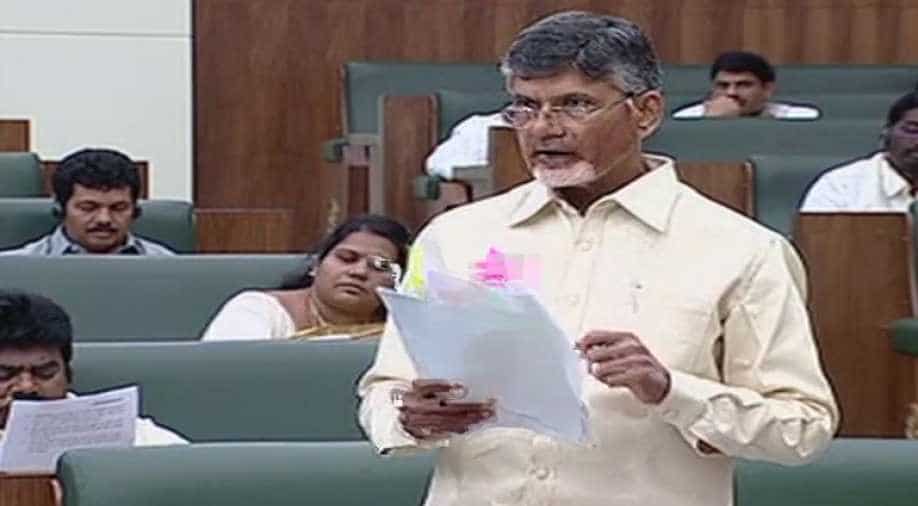 TDP chief Chandrababu Naidu said that had Andhra Pradesh been given the same 'hand-holding' as the North Eastern states, many industries would have come to the state. Photograph:( ANI )

In his letter to Chandrababu Naidu, Amit Shah claimed that the TDP chief's decision to quit the ruling NDA was guided by 'political considerations' instead of Andhra Pradesh's development concerns

The TDP chief said that the BJP-led central government was providing special benefits to the North Eastern states even now and had Andhra Pradesh been given the same "hand-holding", many industries would have come to the state.

"Amit Shah's letter is full of false information which shows their attitude. Even now Centre is providing special benefits to North Eastern states. Had Andhra Pradesh been given the same hand holding, many industries would have come to the state," the Andhra Pradesh chief minister said.

Chandrababu Naidu also refuted Amit Shah's charge that the TDP had quit the NDA for political reasons. He said it was done "in accordance with people's aspirations". The Andhra Pradesh chief minister also said that despite being the highest contributor to the Central Goods and Services Tax (CGST), the state was still lagging behind all other states in per capita income.

"TDP had won local body elections before bifurcation. After bifurcation, people were in an insecure position. We allied with BJP for welfare of state. Amit Shah in his letter wrote we quit NDA for political reasons. But we did so in accordance with people's aspirations," Chandrababu Naidu said.

"TDP is synonymous with development. Andhra Pradesh is the highest contributor to CGST. Despite our strong efforts and better development in GDP, Andhra is still lagging behind all the southern states in per capita income," he said.

The TDP chief said it was the "unscientific division" of the state into Andhra Pradesh and Telangana that had pushed the former 10 years back and that the BJP government was equally responsible for bifurcating the state.

"Unscientific division of state pushed us 10 years back. Centre is responsible for that. You claim you're sensitive to our problems. But in reality you too were equally responsible for passing bifurcation bill within 20 minutes behind closed doors," Chandrababu Naidu said.

In his letter to Chandrababu Naidu, Amit Shah claimed that the TDP chief's decision to quit the ruling NDA was guided by "political considerations" instead of Andhra Pradesh's development concerns, and dubbed his move "unfortunate and unilateral".

Amit Shah also said that the BJP is a true well-wisher of the state.

He also cited a number of development projects undertaken by the Centre for the state, besides funds given to it, as he sought to reject the charge that the Modi government had not fulfilled its promises.

"You may recall that during the previous Lok Sabha and in Rajya Sabha, when your party did not have adequate representation, it was the BJP that set the agenda and ensured that justice is done to the hardworking Telugu people in both states," the BJP chief had written in his letter.

The TDP pulled out of the BJP-led alliance over the refusal to accord special category status to Andhra Pradesh and fulfil other commitments made at the time of state's division in 2014.

The party has also given notice for a no-confidence motion against the Modi government in the Lok Sabha, which could not be taken up due to an unending uproar in the Lower House.