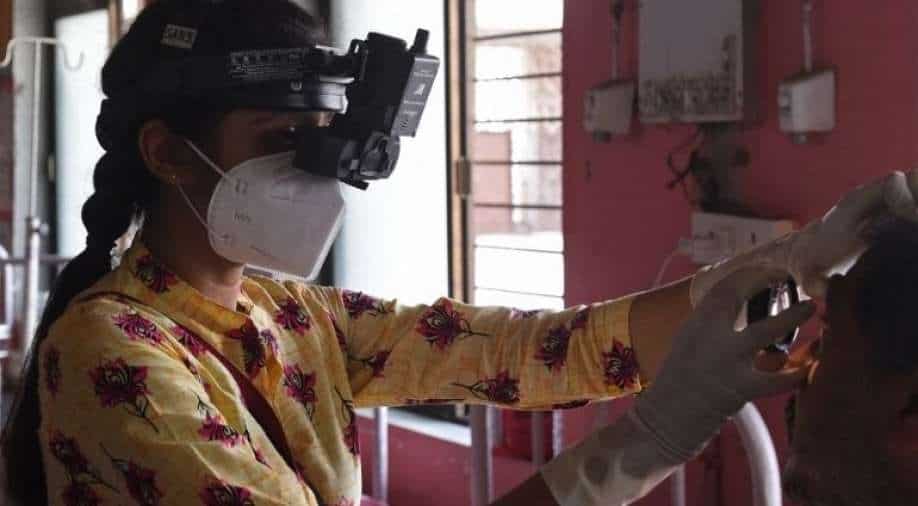 A doctor examines a patient infected with Black Fungus or scientifically known as Mucormycosis, a deadly fungal infection, at a civil hospital in India on May 23, 2021. (File Photo) Photograph:( AFP )

Mumbai has reported its first case of Mucormycosis or 'black fungus' this year amid a surge in Omicron cases. The 70-year-old man had tested positive on January 5 and was hospitalised on January 12 after complaining of weakness.

A 70-year-old Indian man was diagnosed with the black fungus, or mucormycosis, at Wockhardt hospital in Mumbai Central during the ongoing third wave of COVID-19.

It's the new instances that have been recorded during the third wave.

Experts say the patient is stable and is currently receiving intravenous antifungal treatment.

According to doctors, he still needs repeated debridements and will require antifungal treatment for a longer period of time.

According to the hospital, the patient tested positive for COVID on January 5, after which he was taken to Wockhardt Hospital on January 12 with a complaint of weakness and blood sugar levels of 532, with urine ketones present.

"We immediately started the treatment of diabetic ketoacidosis and did the necessary investigations. The patient was not on steroids. However, on the third day of admission, the patient complained of cheek pain, which was unusual, and there was swelling, which was absent during the admission. The MRI showed chronic sinusitis but no bony erosions," said a doctor.

Watch | Gravitas: What is Black Fungus or Mucormycosis?

According to Dr. Honey Savla, Consultant Internal Medicine, Wockhardt Hospital, Mumbai Central, the swelling and pain on the left side of his face continued to increase, and he developed lid edemaptosis.

Koh Mount received a nose swab, which revealed the proliferation of fungal hyphae.

The Ministry of Health and Family Affairs classified Black Fungus as a "notifiable disease" under the Epidemic Diseases Act 1897 in May, when the second wave of COVID-19 was underway.

Over 40,000 COVID-19 recovered patients in India were discovered to have mucormycosis, including 741 in Mumbai.