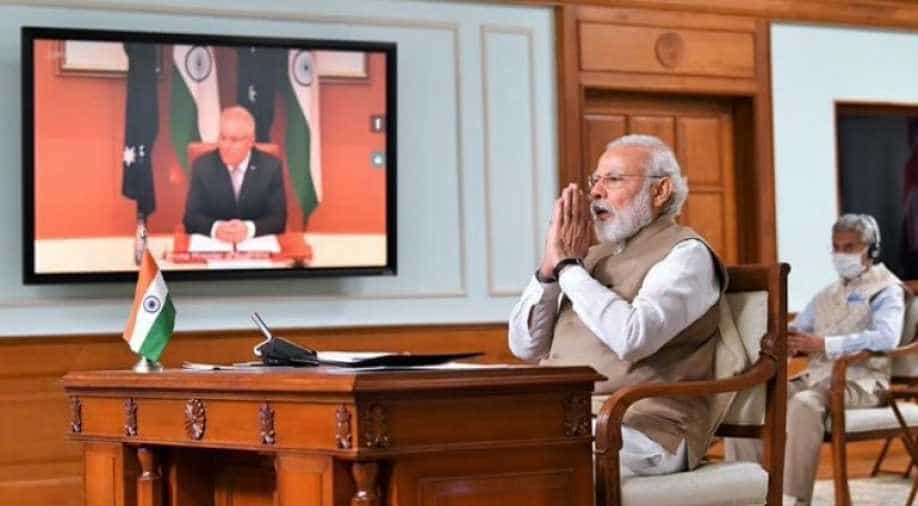 India backed a motion at the World Health Assembly for an independent probe. In response, China became more aggressive in Ladakh. So, India and Australia are now working together.

Make China pay is work in progress, new strategies are being explored and new alliances are taking shape. Australia was the first to demand an investigation into the Wuhan virus outbreak.

In response, China slapped punitive tariffs but Australia did not budge. It got support from more than 100 countries including India.

India backed a motion at the World Health Assembly for an independent probe. In response, China became more aggressive in Ladakh. So, India and Australia are now working together.

It was perhaps the first virtual summit of its kind. It reflected the determination of both sides to hold talks. There were significant outcomes. Firstly, India and Australia have entered into a "comprehensive strategic partnership" and wide-ranging declaration on maritime co-operation has been signed.

"India and Australia have common concerns regarding the strategic, security, and environmental challenges in the Indo-Pacific maritime domain," the joint statement said.

"These include activities and actions that are inconsistent with international law," it added.

Then, there was an arrangement for mutual logistics support - cooperation in defence, science and technology.

Also, a pact on sharing military logistics which will give Indian warships and aircraft enhanced reach in the Pacific. Military assets of both countries can re-supply and re-fuel at each other's bases.

Under it all foreign investors will face greater scrutiny when bidding for sensitive assets regardless of the size of the deal or whether the buyer is private or state-owned - compliance would also be tightened. It's the biggest shake-up if reports are to be believed.

The authorities plan on spending an additional $50 million only on the enforcement of rules.

There is China's belligerence at the border with India and its many diplomatic firestorms with Australia have only been a catalyst for India-Australia ties.

Both countries may be miles apart but they have united against a common threat.