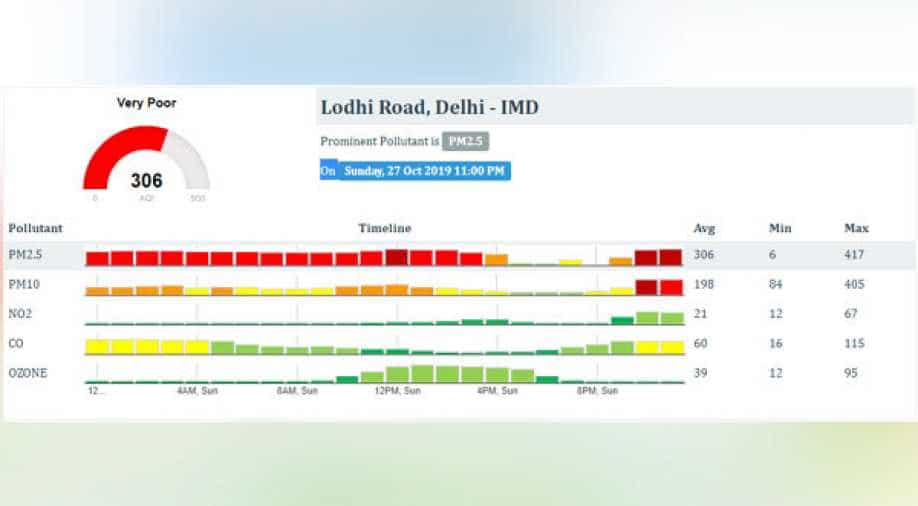 The overall air quality index stood at 306 and 356 in Delhi and Noida respectively.

Delhi and Noida were left reeling under 'very poor' pollution levels after Diwali celebrations which saw people bursting crackers to mark the occasion.

The overall air quality index stood at 306 and 356 in Delhi and Noida respectively.

Extremely poor pollution levels were previously predicted in Delhi due to firecracker emissions, unfavourable weather and a significant spike in stubble burning in neighbouring states.

As Haryana too witnessed bursting of crackers on Diwali, its AQI stood at 279 (poor) at NISE Gwal Pahari area in Gurugram.

On Saturday, the System of Air Quality and Weather Forecasting And Research (SAFAR) had predicted that the air quality will get even worse in coming days and the AQI was expected to be around 324 due to Diwali.

In the wake of the increased pollution, Delhi residents have complained of a spike in respiratory problems and allergies.

Stubble burning in Punjab and Haryana makes the situation in Delhi worse. According to Punjab Remote Sensing Centre (PRSC), straw burning has increased this year.

To curb air pollution, the Arvind Kejriwal-led government in Delhi has announced the implementation of the Odd-Even scheme from November 4 to 15.