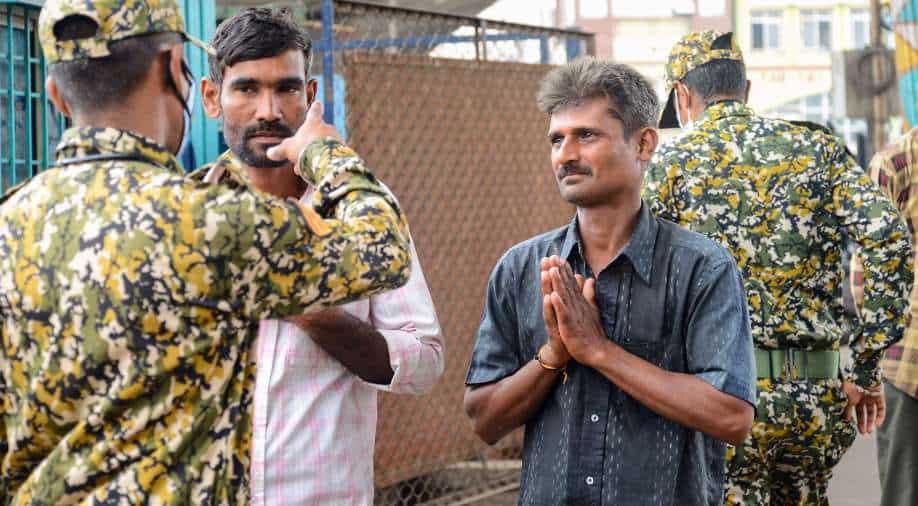 A man pleads with a BBMP marshal not to fine him for not wearing a face mask Photograph:( PTI )

The health department has already approached the police department to track and trace these persons. The department is planning to send all samples to genomic sequencing tests to get clarity on the presence of Omicron virus

The missing people, who arrived between November 12 and 22, were not found at the addresses given by them at the airport and their mobile phones were switched off.

As many as 57 persons had arrived from “at-risk” countries.

“By tonight (Friday) all 10 people who have reportedly gone missing should be traced and they should be tested. Travelers will not be allowed to leave the airport until their report is out,” Ashok said after a top level on Omicron.

Chief minister Basavaraj Bommai on Friday chaired a meeting with experts, senior Ministers and officials in the wake of two cases of Omicron variant being detected in the state.

The health department has already approached the police department to track and trace these persons. The department is planning to send all samples to genomic sequencing tests to get clarity on the presence of Omicron virus.

The foreigner left the country after testing negative, while the doctor, aged 46, had no travel history.

Five contacts of the doctor have also tested positive and their samples have been sent for genomic sequencing.

Intensifying screening of international passengers at airports, asking educational institutions to postpone their public events, and limiting gatherings, meetings, conferences to 500 people, are among the other measures announced by the government.

Also read | WHO warns Asia-Pacific to brace for Omicron, urges countries to speed up vaccination

RT-PCR testing of over 16,000 passengers arriving on 58 flights from 'at risk' countries have been done so far. Eighteen of these tested positive for in RT-PCR testing, their genome sequencing is underway so that it can be determined if they have Omicron variant or not, Union health minister Mansukh Mandaviya informed the Lok Sabha earlier today.