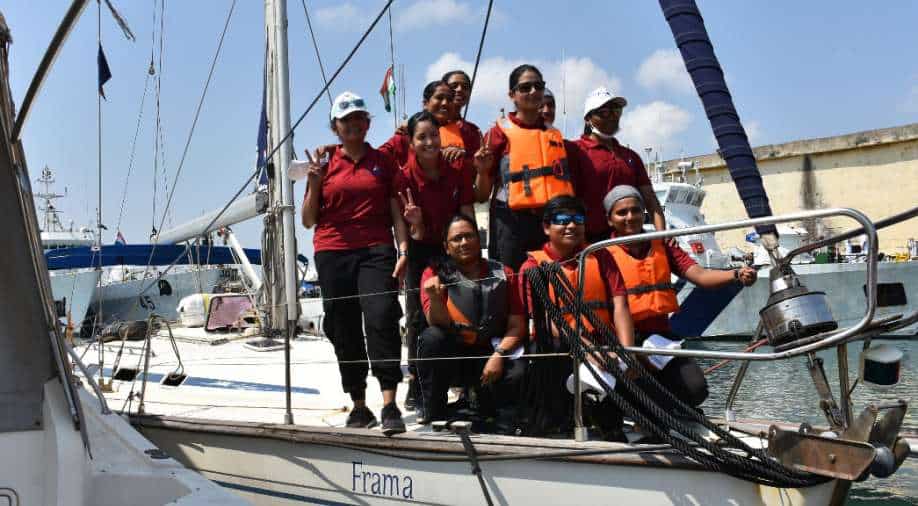 Sailing on a German-origin, class A yacht, which is meant for navigating the open ocean. However, this is unlike any other expedition

Its's one thing to train in blue-water sailing in a creek and entirely another to be doing so at the high seas, in the Bay of Bengal. Well, you could call the transition a sea change. This is precisely the feeling that nine women officers of the Indian army experienced, after completing a historic expedition from Chennai to Visakhapatnam and back.

Sailing on a German-origin, class A yacht, which is meant for navigating the open ocean. However, this is unlike any other expedition. While the boat does have an engine for backup and emergency purposes, its primary propulsion is the ability and seamanship of the crew to dynamically adjust the sails and harness the winds, ocean current to reach their destination.

WION spoke to the crew to understand their mission and how they accomplished it successfully.

Belonging to different arms and services of the Indian army and having no prior experience in sailing, it was their thirst for adventure that brought the women officers together.

"Most of us did not know anything about sailing. Our training at army heavy bridging training camp, Marve, began with an introduction to sailing, what it is about, the nuances, different kinds of boats, principles of sailing and even navigation in day and night conditions. It's amazing how our team of women officers have completed the mission successfully, with specialised training for a few weeks" said Captain Shubham Solanki, who was part of the sailing crew.

The yacht with sails that’s being towed was home to 9women officers of @adgpi for 7days,as they sailed 2000kms #Chennai - #Vizag and back..

It’s cabin is barely 150sqft in size and that’s where everything from, comms to resting, Kitchen, storage washrooms are #india #women pic.twitter.com/LGn9F5XY6U

At the high seas, their yacht was at the mercy of the elements. While the nearly 2000km round-trip was expected to take only four days, the challenges posed by the wind conditions made the trip longer by three days.

While sailing, the crew took turns to perform all functions on-board, which included manning the boat, navigating, cooking, communications etc. While the sailors did get to rest after their task, it was near-impossible to catch sleep while sailing on a vessel that was being tossed around by the ocean current. The nine-member crew had an onboard shelter that was barely 150 square feet, where they had to manage everything from cooking to dining to communications, storing supplies and even getting some rest.

According to Major Mukta Shree Gautam, the captain of the expedition, it was a rare privilege and opportunity to lead the first-ever mission by women officers of the army.

"I cannot be thankful enough to have a team who excel in whatever they do. We shared the same passion for adventure. We learnt that women make an amazing team. It was the most cherished memory. We learnt how to keep calm, manage at high sea, implement the learnings when conditions are unfavourable. How we cooperated and implemented our learnings and kept the team morale high, was amazing," she said.

For Major Priya Das, who was part of the expedition crew, the deep blue seas have always been a fascination and her love for adventure sports was an added advantage.

Also read | Want to change your photo on your Aadhaar card? Click here to see the steps

"I'm extremely fond of adventure sports… Land, sky and sea have always been mesmerising for me… On land, I have experienced horse-riding and many other adventure sports, in terms of flying I have done a micro-light flying course in a fixed-wing aircraft… To date, I was painting deep blue only on canvas and now I have had the experience to have such a great experience of the real deep-blue at sea, via this expedition," she expressed.

Although initiated by the Indian army adventure wing, this maiden sea-sailing expedition by women officers of the Indian Army has a greater goal.

It is aimed at motivating young women to consider a career in the Indian defence forces and to promote adventure sports and specifically sailing. With a 7500-km-long coastline, sailing is a sport with immense potential in India.