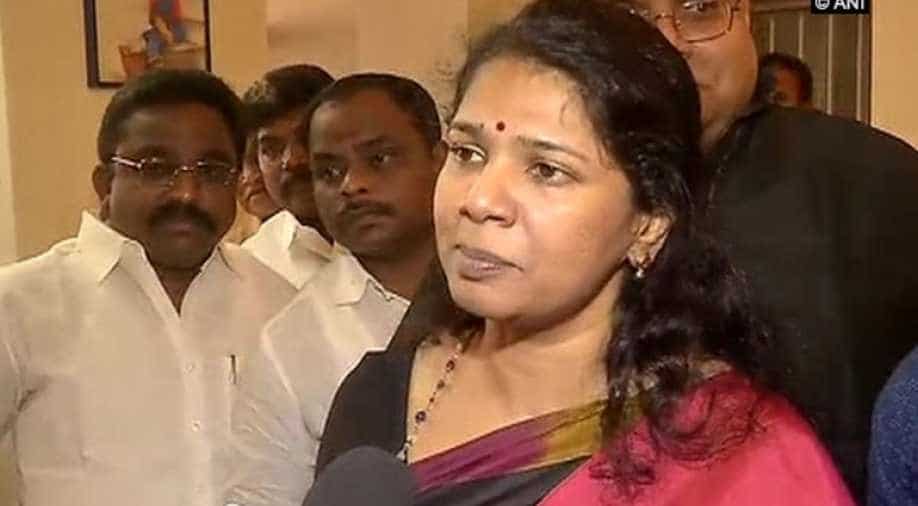 'This verdict is an answer to all the allegations and problems that we went through,' Kanimozhi added. Photograph:( ANI )

Hours after getting acquitted in the 2G spectrum allocation scam case, Rajya Sabha Member of Parliament (MP) and Dravida Munnetra Kazhagam (DMK) leader Kanimozhi on Thursday welcomed the court's judgement and said it was an answer to all the allegations made against her.

An elated Kanimozhi told ANI: "We are very happy as justice is prevailed. It's a big day for DMK and my family too. This verdict is an answer to all the allegations and problems that we went through."

Earlier in the day, the special Central Bureau of Investigation (CBI) court acquitted all the accused, including former telecom minister A Raja and Dravida Munnetra Kazhagam (DMK) MP Kanimozhi, involved in the scam.

Further showing confidence on the RK Nagar bypoll held today in Tamil Nadu, Kanimozhi stated: "DMK is going to win this time no doubt on that."

Voting in RK Nagar Assembly constituency, which was left vacant after the death of former chief minister of Tamil Nadu J Jayalalithaa, has begun. While the counting of votes will be held on December 24.

The court's verdict had come nearly seven years after the first arrest made by the CBI in 2011.

The alleged scam relates to the granting of 2G spectrum licence allocations in 2007-08 which caused, according to a report by the Comptroller and Auditor General of India, a loss of Rs 1.76 lakh crore to the public exchequer.

The scam was among the major corruption scandals that came to light during the second term of the UPA government headed by Prime Minister Manmohan Singh.

The bypolls were earlier scheduled for April 12 earlier this year, but were cancelled following allegations that sums of money were distributed in a vote-for-cash scam.