10% quota for poor among upper castes: Who said what 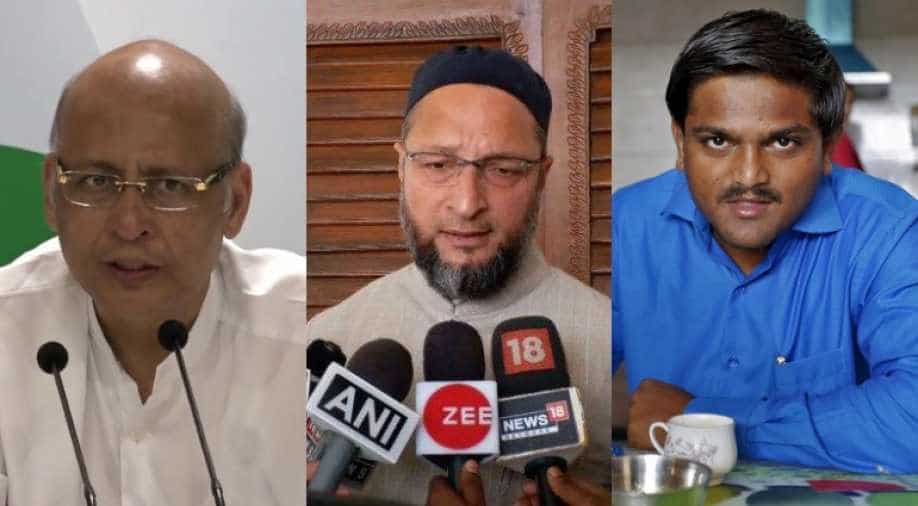 The decision has received a mixed response from common people but has invoked strong reactions from opposition parties.

In a significant decision ahead of Lok Sabha polls the Narendra Modi cabinet on Monday has approved a 10% quota for the upper castes.

The decision has received a mixed response from common people but has invoked strong reactions from opposition parties.

Within minutes of the Union Cabinet's decision, the Congress has raised questions over the move terming it as a poll gimmick.

Congress spokesperson Abhishek Singhvi said the government did not think about this for four years and eight months and brought this just months before the model code of conduct coming into effect.

He also asked whether the government has the majority to bring about a Constitution amendment in Parliament.

"Why did you not think of this for four years and eight months? So obviously thought of as election gimmick three months before the model code. You know that you cannot exceed 50 per cent maxima so it is done only to posture that you tried," he said in a tweet.

See last two tweets re reservation 4forwards? Qs—did u nt think of this for 4 yrs 8 mths? so obviously thought of as election gimmick 3mths b4 model code! (3) u know u cannot exceed 50% maxima so it is done only to posture tht u tried unctal thing (4) do u hv majority 4ctal am?

Delhi Chief Minister and Aam Aadmi Party leader Arvind Kejriwal challenged the Bharatiya Janata Party-led government to get the Constitutional amendments passed before the elections this summer. “If they do so, the Aam Aadmi Party will support the government, else it will be clear it is just an election gimmick,” Kejriwal tweeted.

MoS for Social Justice & Empowerment Vijay Sampla: It's a historic step by Modi govt. It's meant for economically weaker upper caste sections whose annual earning is lower than Rs. 8 lakhs and who possess less than 5 acres of land. It will not affect other reservation categories. pic.twitter.com/4YQt97sXhW

Former Minister of Finance Yashwant Sinha has termed this decision as nothing more than a jumla.

The proposal to give 10% reservation to economically weaker upper castes is nothing more than a jumla. It is bristling with legal complications and there is no time for getting it passed thru both Houses of Parliament. Govt stands completely exposed.

Harish Rawat,Congress on 10% reservation approved by Cabinet for economically weaker upper castes: 'Bohot der kar di meherbaan aate aate', that also when elections are around the corner. No matter what they do, what 'jumlas' they give, nothing is going to save this Govt pic.twitter.com/PXBwWvNKTY

"Is it like all the previous 'jumlas'? There are just two days left for the Winter Session of Parliament to over and now they are coming with a bill… it is possible that this is just another lollipop from this government. They just want to attract upper caste votes and people who had diverted towards the Congress in the recent elections. I can say that it is just a jumla before the Lok Sabha elections," says Patidar leader Hardik Patel.