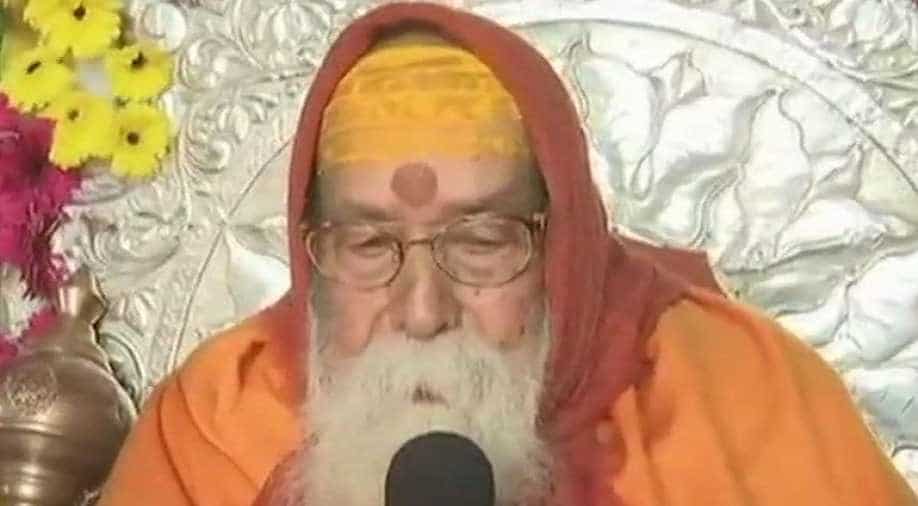 Swami Swaroopanand Saraswati said the 'Dharam sansad ', after a three-day meeting in Prayagraj, decided that foundation stone for the temple will be laid on February 21. He said the saints and those mobilised for the effort would not be deterred by arrests or any other kind of obstacles.

A conglomerate of saints on Wednesday said the construction of Ram Temple in Ayodhya will start on February 21.

Swami Swaroopanand Saraswati said the 'Dharam sansad', after a three-day meeting in Prayagraj, decided that foundation stone for the temple will be laid on February 21. He said the saints and those mobilised for the effort would not be deterred by arrests or any other kind of obstacles.

The decision came a day after the government approached the Supreme Court for permission to restore the "excess" land surrounding the disputed portion in Ayodhya to Ram Janambhoomi Nyas.

The government, in a petition, sought direction for releasing to the Nyas 67 acres, which it had acquired about two-and-a-half decades back, leaving untouched 0.313 acres of disputed.

Union Minister Prakash Javadekar later said the government “wants to give the land back to Nyas to build Ram temple there”. He said the government expects the sanction to be given immediately as there has been “too much delay” on the issue which is 70-year-old.

“The government has in-principle decided to restore the land” to the Nyas, Javadekar told reporters in Prayagraj, hours after the writ petition was filed in the top court.

“The land has to be given to the Nyas,” he said, adding the Centre is not touching as of now 0.313 acres of land which is disputed. The government move came against the backdrop of Ram Janambhoomi Nyas making an application to the government of India, demanding the return of the undisputed part of the land to it.

Government sources said its move is a part of the constitutional route that Prime Minister Narendra Modi and BJP National President Amit Shah have spoken about.

The sources said the petition was in pursuance to an earlier Supreme Court judgement by which the government was allowed to take a policy decision with regard to 67 acres of undisputed land.

In 1994, a five-judge Supreme Court bench had held that a mosque was not an “essential part of the practice of the religion of Islam” and that namaz could be offered anywhere and hence, “its acquisition (by the state) is not prohibited by the provisions in the Constitution of India”.

The sources said the Government of India has exercised its right created by the court itself and has shown fairness by itself proposing - leaving - (with the view to give - the extent of land required). The architecture created by the court in Ismail Farooqui case provides the government with a window to adopt such measure, they said.

"The central government was duty bound as per para 49-59 of the Ismail Farooqui judgement. The judgement says that the government can take a policy decision and there need not be any judicial scrutiny", according to the sources.

The sources also claimed that the Ismail Farooqui judgement is clear that the Muslims are not interested beyond the disputed area and do not lay any claim over the area acquired beyond .313 acres.

It is also mentioned in para 49 of the judgment that the title of Hindus not in dispute.

Recently, the Prime Minister had said that any decision on an Ordinance on the Ram temple can be considered only after the judicial process gets over.

Significantly, the government filed the petition on a day when a new five-judge bench was to hear the Ayodhya case before it was cancelled due to unavailability of one of the judges Justice S A Bobde.

In 2010, the Allahabad High Court had divided the disputed land in Ayodhya into three parts for each of the parties — the Sunni Waqf Board, the Nirmohi Akhara and Ram Lalla.

Welcoming the government petition, Uttar Pradesh Chief Minister Yogi Adityanath said, "Now we must get permission to work on the undisputed land."

He said the petition is in favour of the country.

"The dispute has been going on for many years. My government has been saying this from the beginning. An application has been submitted by the Centre... We welcome this move of the central government. This was needed for the country's prestige," said Adityanath while addressing the media after holding a Cabinet meeting in Prayagraj, where the Kumbh Mela is underway.