NDA's allies who are part of the Modi 2.0 Cabinet 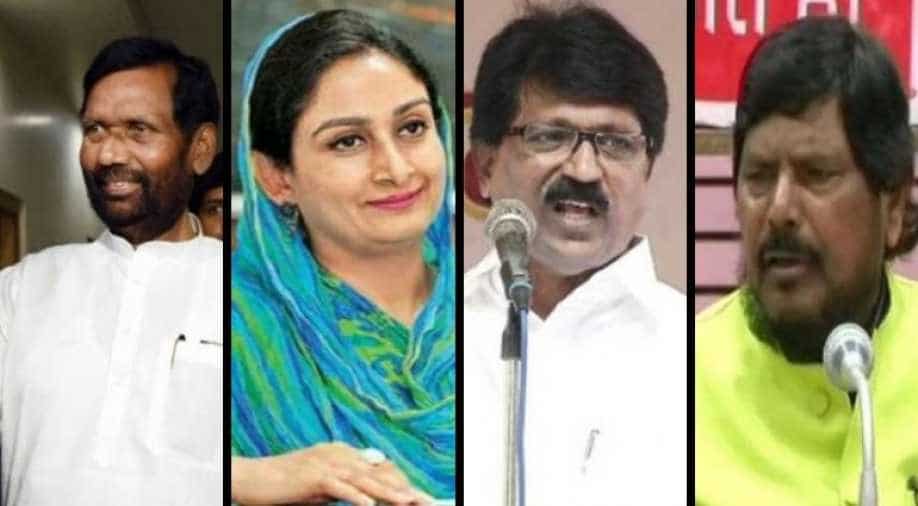 Here's taking a quick look at the prospects of NDA allies in clinching Cabinet portfolios for the upcoming term.

As Prime Minister Modi and the new council of ministers took oath for the Modi government 2.0 on Thursday, here's taking a look at the NDA allies who successfully clinched Cabinet portfolios for the new term.

Paswan, one of the most veteran parliamentarians, was a Cabinet minister in the last government. His party has won all the six seats that it had contested in 2019 Lok Sabha elections.

BJP's other ally JD(U) which clinched over 16 seats in the Lok Sabha has announced its absence from the new government.

Ahead of the oath-taking ceremony, Nitish Kumar said he was not going to be part of the new cabinet as it would just be "symbolic participation".

Speaking to reporters, Kumar said, "They (BJP) wanted only one person from JDU in the cabinet, so it would have been just symbolic participation. We informed them that it is okay we don't need it. It is not a big issue, we are fully in NDA and not upset at all. We are working together,no confusion."

PM Modi led BJP and its allies Janata Dal (United) and Lok Janshakti Party (LJP) swept away all the seats in Bihar leaving one for the Congress. The NDA got 39 out of the 40 Lok Sabha seats in the state.

She was the food processing minister during the previous tenure of the government.

The BJP-SAD alliance won only four out of the 13 seats in Punjab in the 2019 Lok Sabha elections.

Earlier reporters had suggested that Shiromani Akali Dal leader Sukhbir Singh Badal will not hold any ministerial berth in the Cabinet adding that Harsimrat Kaur Badal will be part of it.

BJP's other alliance from Maharashtra, Republican Party of India chief Ramdas Bandu Athawale was also inducted in the Modi 2.0 Cabinet. Athawala was appointed in the Union Minister of State.

The popular Dalit face served as the minister for social justice and empowerment in the previous Narendra Modi Cabinet.