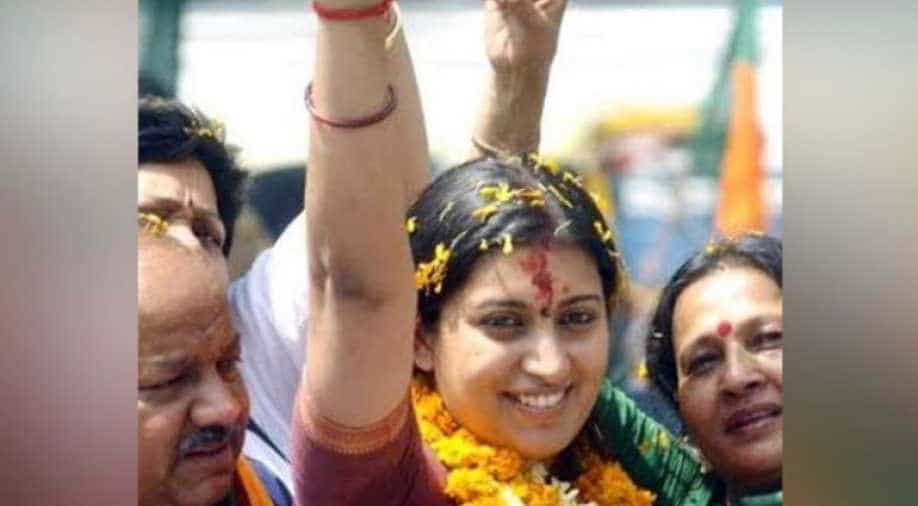 Smriti Irani was leading by 468514 votes to register a win in the political hotbed of Amethi.

Putting an end to Amethi's decades-long-relationship with Congress, Smriti Irani has emerged as the star of the 2019 Lok Sabha elections by giving Rahul Gandhi a run for his money in a constituency which was considered a bastion of the Gandhi family for decades.

Irani was leading by 468514 votes to register a win in the political hotbed of Amethi.

From featuring in one of the most watched soap operas in Indian history, to tirelessly campaigning through the streets of Amethi, it was a long journey for the actor-turned-politician. Needless to say, she has owned every bit of the success she has tasted.

The 43-year-old made a mark in the world of entertainment by playing the pivotal role in Ekta Kapoor's show 'Kyunki Saas Bhi Kabhi Bahi Thi', one of the most watched soap operas in Indian history.

By the time she announced her decision to step into Indian politics and joined BJP back in 2003, her acting career had already made Smriti a household name.

While she was respected by many for her acting skills, Smriti as a politician had a rough time proving herself. The fact that she couldn't manage to win even a single election in her career, including losing to Kapil Sibal in Chandni Chowk in 2004 to losing Amethi to Rahul Gandhi in 2014, did not work in her favour.

Adding another hurdle to her already unsteady political career, Smriti also came under the scanner for provided contradictory information about her educational qualifications in the affidavits she filed for elections in 2004, 2011 and 2014.

During her journey as a politician, Smriti has also faced her share of sexist remarks in the world of politics dominated by male leaders. From snide comments about her former years in the show business to some extremely distastefully personal remarks, she endured it all.

Sanjay Nirumpam, former President of the Mumbai Regional Congress Committee, had once, during a TV debate, said to Irani, "Aap to TV pe thumke lagati thi, aaj chunavi visleshak ban gayi!" (You once danced for TV, and now you have become a psephologist?).

Earlier in April, Congress ally and PRP leader Jaydeep Kawade said that the size of the Smriti's bindi denotes the number of husbands she has.

In spite of all the hurdles, Smriti kept on moving forward. In the 2014 Lok Sabha Elections, Smriti locked horns with Congress Leader Rahul Gandhi in Amethi.

While she ended up losing in the constituency, BJP emerged victoriously and formed the government in the centre. Narendra Modi became the Prime Minister of India and Smriti was appointed as the Minister of HR Development in the cabinet.

However, in 2016, following the controversy about her education qualification, the HRD Ministry was taken away from Irani, and she was given the Ministry of Textiles instead.

This change in the title did not keep her from working hard. In 2017, when M Venkaiah Naidu resigned as the Minister of Information and Broadcasting, Smriti was given the charge of the ministry.

In spite of all the drama in her life as a politician, Smriti is one of the few Indian politicians who appreciated for their witty and funny Social media updates. From sharing memes about trending issues, to giving a hilarious twist to her own life updates, Smriti's Instagram feed has posts that common people relate to.

As BJP started gearing up for 2019 Lok Sabha elections, Smriti's eyes were sent on Amethi. Determined to defeat Rahul this time, she tirelessly campaigned throughout the constituency urging and convincing people to vote for BJP.

Up until today, Amethi had always been a nightmare for a non-congress politician who dared to contest from the constituency.

The Gandhi family established a bond with the people of Amethi back in 1977, when Sanjay Gandhi first came to contest for the parliamentary election from here. Since then, Amethi became a bastion of the Gandhi family, a relationship that lasted for decades.

Amethi did not fall into Smriti's hands overnight. The victory is a result of countless rallies, road shows and speeches, during which she exhausted her lungs listing all the reasons why people of Amethi should not vote for Congress, like they do every time, and give her a chance

While Rahul did give her a tough competition, the voters of Amethi have made a choice and for the first time in decades, it is not Congress.