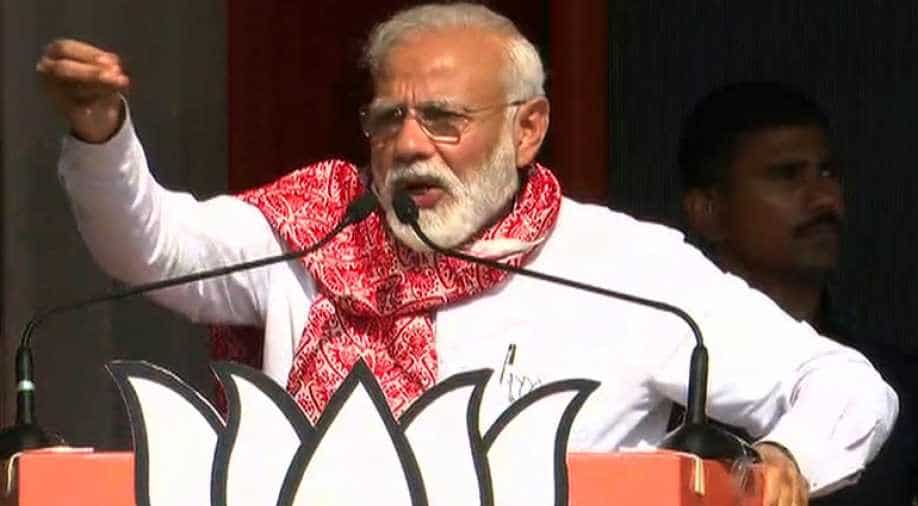 Hitting out at the BSP chief Modi said, 'Even the Congress government wanted to suppress the incident involving a Dalit woman as the party thought 'hua toh hua' (So what, it happened).'

Prime Minister Narendra Modi Sunday mounted a scathing attack on BSP supremo Mayawati accusing her of "shedding crocodile tears" over the gang-rape incident in Rajasthan's Alwar and demanded that her party withdraw support from the Congress government in that state if she is "serious".

On April 26, the victim was travelling with her husband on a motorcycle when the accused stopped them and took them to an isolated place off the road. They beat the husband and raped her in front of him, threatening them of dire consequences.

Her husband claimed that he had approached Rajasthan police on April 26 after the incident, but an FIR was filed on May 2. He had alleged that the police did not take action saying that they were busy with elections.

Addressing election meetings in Kushinagar and Deoria in eastern Uttar Pradesh, Modi said, "Please do not shed crocodile tears. If you are serious, why don't you withdraw support from the Congress government in Rajasthan."

BSP has given support to the Congress government in the state.

Expressing concern over the gang-rape of the Dalit woman, Mayawati had Saturday alleged that the Congress government in Rajasthan did not let the matter come to anyone's notice by "terrorising" the victim's family until the completion of the polling process there.

"Under these circumstances, the victim and her family will not be able to get proper justice. The BSP appeals to the Supreme Court to take notice for ensuring prompt justice and strict punishment to the accused," she had said.

Hitting out at the BSP chief Modi said, "Even the Congress government wanted to suppress the incident involving a Dalit woman as the party thought 'hua toh hua' (So what, it happened)."

His reference was to Congress leader Sam Pitroda's "hua to hua" remark about the in 1984 anti-Sikh riots, which raised a political storm over the weekend.

Continuing his tirade at the opposition, the prime minister said, "The biggest example of how the 'mahamilawat' (highly adulterated) SP-BSP-Congress alliance actually works is Rajasthan."

"When the (Lucknow) guest house incident happened, the entire country was pained. What is the reason that you are not feeling pained now? If you are so honest about the dignity of the daughters, then you should immediately write a letter to the Rajasthan Governor and withdraw your support from the Congress government," he said.

"A Dalit daughter is gang-raped and there is a government of the Congress and 'naamdaar' (dynast). And the Rajasthan government is not a dispensation which enjoys full majority. It is working with the support of BSP. It is busy in hushing up the matter," Modi said.

In the infamous Lucknow guest house incident in 1995, armed Samajwadi Party cadre had assaulted the BSP supremo when she was having a meeting there.

Attacking the Congress, the prime minister said, "The Congress which chants nyay, nyay, nyay, its naamdaar (dynast) has been silenced by the rapists. Today, the daughters of Uttar Pradesh are asking Behenji (Mayawati), and Behenji you have to answer why you have not withdrawn your support to the Congress government (in Rajasthan). You are shedding crocodile tears by only indulging in issuing statements."

"To punish those who commit crime against women, this chowkidaar of yours had made provisions for the capital punishment. If the intention of the Congress government was right, it would not have suppressed the Alwar incident, but they have only one answer 'hua toh hua'. Be it corruption, price rise or the 1984 anti-Sikh genocide, their answer is 'hua toh hua'," he said.

Polling for the Lok Sabha seats in Rajasthan took place in two phases on April 29 and May 6.