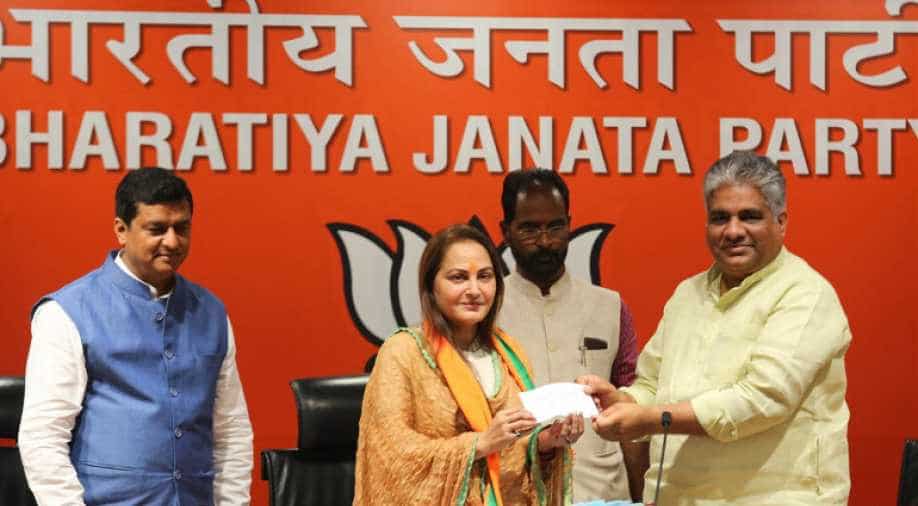 The people of Rampur dislike what Azam Khan says and will reply to him with their votes, Jaya Prada said.

Seeking a third term from Rampur Lok Sbha seat - this time as a BJP candidate, Bollywood actor-turned-politician Jaya Prada on Monday attacked her one-time Samajwadi Party colleague and now a rival candidate Azam Khan, saying he is fighting polls to "legalise his acts".

"I have an emotional attachment with the people of Rampur. I am here to work for them and make Narendra Modi our prime minister once again while Azam is fighting election to legalise his acts," Jaya Prada said.

Jaya Prada, who had created history in 2004 by winning the Rampur seat for the first time for SP, defeating the heavyweight, sitting Congress MP Begum Noor Bano by 85,000 votes, is now back as a BJP candidate.

Asked what differences she finds in the ensuing Lok Sabha polls as compared to her earlier bids, Jaya Prada said, "With the BJP cadre around with me, things have become much easier. I had to manage things earlier on my own but with the cadre support this time, it is quite easy to manage them."

On how she takes Azam Khan's statement calling her a singer-dancer, Jaya Prada said, "He can say anything. He did not have any respect for women. It's his habit to make such statements but the people of Rampur knows him very well."

They dislike what he says and will reply to him with their votes, she added.

"In 2004, when I was in Mumbai (acting in Bollywood) and contested from here, he (Azam) campaigned for me. Didn't he know me then? He now calls me 'amrapali' (dancer), naachne wali etc. It's his habit, he can say anything to any women. He is a performer himself," she added.

About the response she is getting from the people of Rampur, Jaya Prada said, "Jatavs and Dalits are unhappy with the SP. They are with us. Azam, who has been nine-time MLA from Rampur has done nothing for rural areas. He had been a Cabinet minister but rural areas still lacks development as he did nothing."

On her rivals' charges that she is an outsider and in Rampur for the Lok Sabha elections only, Jaya Prada asked, "How can I be outsider?"

"I represented the constituency in 2004 and 2009. I have been with the people in their good and bad times. They (rivals) are trying to confuse people but they are certainly not confused. They have made up their mind."

Referring to various controversial remarks made by Azam Khan in past, Jaya Prada said, "Those who call Bharat Mata as 'dayan', who does not acknowledge Kashmir as part of India and use foul language against our PM Modi and CM Yogi Adityanath, stands exposed before people. Their anger is visible when I meet them and they share their views."

Asked if she missed her friend Amar Singh in her poll campaigning, Jaya Prada, who had contested the 2014 polls from Bijnore on a RLD ticket but lost her deposit and slipped into political oblivion, said she was "concerned" about his health.

I pray for his speedy recovery. May he be fine, she said.

On her election issues, Jaya Prada said, she was fighting the poll for restoration of ?women's pride and freeing Rampur from the "illegal grip of Azam Khan".

"I also want to ensure development of the constituency," she said.

"I am sure the people of Rampur will once again give me a chance to represent them," she added.

Rampur is a minority-dominated Lok Sabha constituency in western Uttar Pradesh. It had been a Congress stronghold from 1952 to 1989 before the BJP won it for the first time in 1991.

The Congress, however, managed to wrest it back in 1996 by fielding Begum Noor Bano.

In 1998, BJP's Mukhtar Abbas Naqvi won the seat but the next year, Begum Noor Bano got it back for the Congress again.

The Samajwadi Party made its entry in Rampur in 2004, fielding Jaya Prada who defeated Noor Bano by a big margin.

The Congress did not field Noor Bano this time and gave ticket to Sanjay Kapoor from Rampur, making the fight for it virtually a direct one between Jaya Prada and Azam Khan who is a nine-time MLA from the Rampur assembly seat.