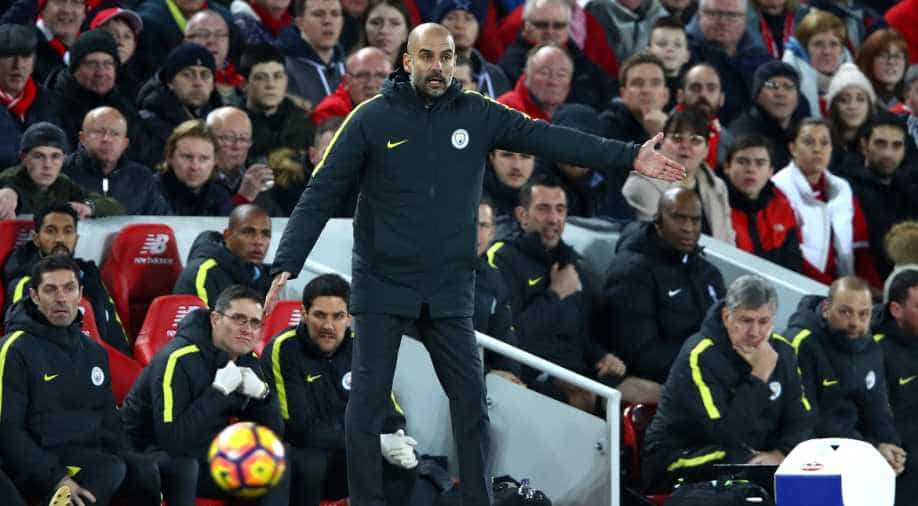 Pep admitted he had taken time to adapt to the Premier League's style of football. Photograph:(Getty)
Follow Us

Pep Guardiola believes Manchester City are being harshly treated by officials and admits he has taken time to adapt to the style of football in the Premier League.

Guardiola was in a tetchy mood despite City's 2-1 victory over Burnley on Monday as he vented his frustrations over the first half dismissal of Brazilian midfielder Fernandinho.

It was Fernandinho's third red card in six weeks and City's seventh in 30 games this season, but Guardiola reacted sarcastically to being questioned over whether his side had a disciplinary problem.

"Yes, from the team with the most ball possession. Yeah, yeah, yeah," said Guardiola.

"We had a lot of disciplinary problems. Now we expect what the FA decide.

To compound Guardiola's bad mood, he felt that Burnley's goal from Ben Mee should have been disallowed for a foul on City goalkeeper Claudio Bravo as he issued another sarcastic reply to a question about Fernandinho's red card.

"It is always our fault, it's always City's fault," he snapped. "Yeah, yeah. I saw other games. All around the world, the Burnley goal on Claudio Bravo is a foul.

"Here, and all around the world, the rules say the goalkeeper in the six yard box cannot be touched. He goes here and the striker does this (slaps his arm).

"But I saw (Marteen) Stekelenburg Everton v Middlesbrough at the beginning of the season and it was the same, it was a goal.

"Okay, so I have to adapt and I have to understand there are special rules here in England. Now I learn, so now we're going to play.

"I saw the foul for Claudio Bravo, that was definite."

Burnley manager Sean Dyche, whose side was undone by goals from Gael Clichy and substitute Sergio Aguero, believed that City should have finished the game with nine men after Bacary Sagna was booked for kicking out at George Boyd as the winger tried to retrieve the ball to speed up kick-off following the visitors’ goal.

"It's a tough one but it's a sending off because he swipes out at Boydie," said Dyche.

"He was trying to get the ball back and go to the centre circle.

"The linesman was a long way from it and the referee was running back towards the centre so maybe the linesman saw enough to give a yellow but not enough to understand it's a kick out."

Fernandinho now faces a four-game suspension, starting with Friday's FA Cup visit to West Ham, and with German international Ilkay Gundogan ruled out by long-term injury, City are short on numbers in midfield.

The City manager also seemed dissatisfied with his own supporters at the start of the second half, gesturing for them to give his team increased support as they sought a badly-needed victory.

"We are going to try and play as best as possible but we need their support."

Earlier, however, the City manager had been even more sarcastic and confrontational in an interview with a BBC reporter when asked whether he thought Fernandinho had deserved his red card.

"You're the journalist not me. Ask the referee not me," he said.

"We'll accept. The team with more ball possession, we have always sendings-off.