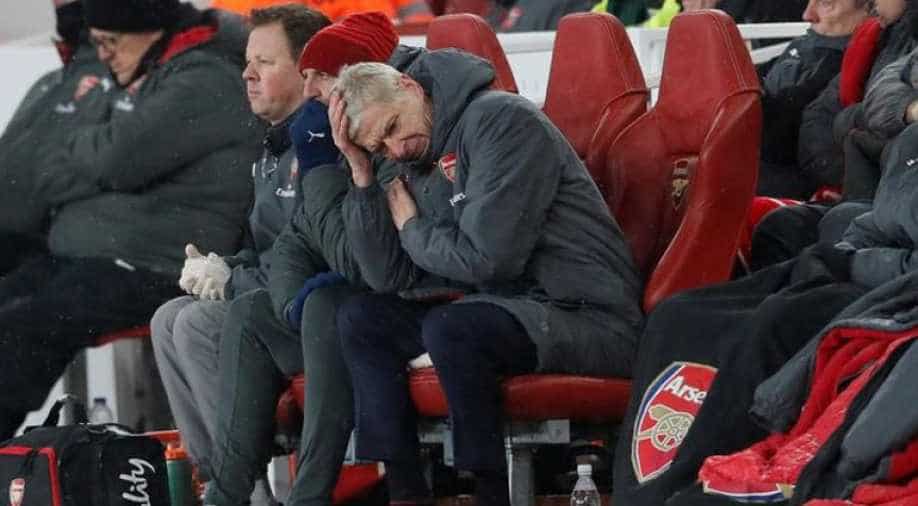 Manchester City tore Arsenal apart for the second time in five days on Thursday, beating them 3-0 on a freezing night at The Emirates to restore their 16-point lead as they close in on the Premier League title.

Arsenal hoped for redemption after City thrashed them by the same scoreline in the League Cup final at Wembley on Sunday but first-half goals by Bernardo Silva, David Silva and Leroy Sane handed the Gunners their second home league loss this season.

Arsenal's club record signing Pierre-Emerick Aubameyang added to the home side's woes when his penalty was saved by Ederson early in the second half after fellow new arrival Henrikh Mkhitaryan was brought down just inside the area.

The win leaves Pep Guardiola's scintillating City side on 75 points from 28 games ahead of second-placed Manchester United and they only have to win five of their last 10 matches to be crowned champions for the third time in seven seasons.

"We are close. It's in our hands, we can't deny it," Guardiola said, while stressing his team must focus on the next game at home to last season's champions Chelsea on Sunday.

He expressed some sympathy for Arsenal manager Arsene Wenger, who has faced renewed speculation over his future at the London club as the Gunners slide out of contention for Champions League football next season for the second year in a row.

"He knows my admiration for him... I know all the managers can be in that situation. I'm sure he's going to take the right decision for him and for the club," Guardiola told a post-match news conference without elaborating.

They can still qualify for Europe's elite club competition, but to do so they will almost certainly have to win the Europa League in which they meet AC Milan in the last 16.

"We played with low confidence, you could see that at the start of the game and we paid for it," said Wenger.

"We needed the penalty to go in, but that was another negative. We lost to a team that is the best in the country at the moment... The difference in the league is no coincidence."

On a snowy night at The Emirates, City's Portuguese forward Bernardo Silva opened the scoring in the 14th minute, collecting a pass after a long weaving run from Leroy Sane and delightfully curling his shot into the far corner past goalkeeper Petr Cech.

City sliced open Arsenal's defence again just before the half-hour, moving the ball swiftly upfield to Aguero who laid it into the path of David Silva racing up on the left, and the Spaniard drove a low shot into the corner to double the lead.

Sane made it 3-0 five minutes later, walking the ball into the goal after another quick-fire City move had bamboozled Arsenal's ramshackle defence who were left chasing shadows.

The young German's goal drew the first of many boos from the home fans in the less than full stadium as their team headed for home and away defeats by City for the first time in 42 years.

Arsenal had a chance to get back into the game when they won a penalty early in the second half but their Gabon striker Aubameyang saw his spot kick saved by Ederson to complete a miserable night that piles more pressure on Wenger's team.